“I love this club and the president dearly but it is time for a change, and that is why I took this decision to step down”, stated the Frenchman.
Zinedine Zidane and Florentino Pérez appeared before the press at Real Madrid City to announce that the coach will be stepping down from his position. The president was the first to speak: “First of all I'd like to thank everyone for being here. As president of Real Madrid I am appearing before you here today alongside Zinedine Zidane, and I would like to let him speak first. Zizou came to me yesterday to inform me of an unexpected decision that he has taken and I think he should be allowed to explain what that decision is and why he has made it. At this moment, I would like to just say that I am standing by him”.

Zidane then said: “As the president said, I have taken the decision to step down as Real Madrid coach. I spoke to him to clarify what I was thinking and I think this is the right moment for all involved: for me, for the squad, for the club… It is a strange moment, but it is an important moment and I had to make this decision for everyone involved”.

“This team needs to continue winning and they need a change. After three years they need different ideas, different ways of working and that is why I took this decision. I love this club dearly and I want to thank the president for the opportunity that he gave me to come and play at this club, this great club. I will remain grateful for the rest of my life. Now, however, it is time for change, for me and for everyone, and that is why I have taken the decision not to continue as Real Madrid coach next year".

Florentino Pérez: "Today is a sad day for me"
Before responding to questions from the press, Florentino Pérez stated: “As you can imagine, after winning this latest European Cup, this has come as a completely unexpected decision. This is a sad day for me, for the players and for everyone involved with the club, but he knows that I wanted to sign him more than anyone as a player, as well as a coach. I would love for him to be by my side forever”.

“Those who know Zizou, know that when he says he ‘made a decision’ the only thing we can do is accept and respect that because that is how he is. Hearing this decision yesterday really took me aback. I would have loved to convince him to stay, but I know how he is and so all I could do was offer my gratitude, support, and appreciation, as well as reminding him that, even though he already knows, this club will be his family forever”.

“You can never be ready for such a decision and yesterday I was reminded of the time I first visited him to ask if he would train the Real Madrid first team and he told me without a doubt that he was ready, that he was certain he would succeed, and he has done exactly that; we are all aware of just what he has done for us".

Thanks
"I thank him for what he has given us, his passion and everything he has done for the club over the years and I’d like to highlight that his behaviour has always been exemplary and in line, as I have always said, with Real Madrid's values. All I would like to say, Zizou, is this is not a time to say goodbye, it is a time to say we will see you soon. I have no doubt he will be back. It is time for a break, and he certainly deserves that.”

Zidane: "This is the right decision"
After the president gave his thoughts, Zidane responded to questions from the press: “As the president said, this could well be a case of “see you soon”. Real Madrid have given me everything and I will always be close to this club. I’m sure the decision makes no sense to a lot of people, but for me it does. It is time for a change, for the players too. After three years, it’s the right decision”.

“What I can say is thank you to all of the fans. They always supported me as a player. These fans have a special place in my heart and I have to thank them for their faith. There are always tough moments throughout the season, when the fans may jeer you, but that is how the club is. The fans can be challenging, but from time to time the players need it. When you are in a difficult moment you have to keep plugging away, and if the fans pile on the pressure it can drive you on”.

“There are challenging moments when you question whether you are the right person for the job. I’ll never forget those tough moments. We finished the season really well by winning the Champions League, but there are challenging moments that make you think. This is the right moment and the players need the change. I must thank the players, they are the ones battling it out on the pitch. This is a challenging club, with a great history, and we pressure the players because we always want more from them. Now it is time for them to take a different approach so that they can keep winning”.

Message to the players
“They know. I haven’t spoken directly to them but they know what my message is. I am going to speak to the captains, I already spoke to Ramos. I’m not going to work with another team for the moment. I’m not looking for another team. I sent the message out to the entire squad and they have all received it. I spoke to Sergio to let him know what was going to happen. As captain and a person, I played alongside him and we’ve been through a lot. He respects my decision and he wished me luck. Sergio is a leader, a captain, he has always been phenomenal. I told him it was a pleasure to share another three years with him”.

The right moment
“This is my decision after three years. People may think otherwise, but I think this is the right time. If I don’t clearly see us continuing to win... In a season anything can happen, but if I don’t envision things clearly it is better to step down rather than stay on and not do well”.

“It is a lot more simple than it seems, sometimes you have to know when to stop. I am doing this for the greater good of the team and I think if I stayed it would be hard to win again next year. We’ve seen that in LaLiga and the Copa. There have been great moments, but also many tough moments and I can’t forget those. I want to end this era at Real Madrid on a high. I did that as a player and I’m doing that now. I think this is the time to go out at the top”.

End of the road for this squad?
“I’m not going to comment on that. This is a very capable squad and they have always shown that. What happens now is not something for me to comment on”.

What has changed
“Nothing has changed, this has been a natural process. When I said what I said on the 20th February, perhaps I was not thinking about leaving and I was being sincere. Sometimes you say things, and then something can happen after. At this club, anything can happen as I have said. This club is all about the day to day, and here today, I know I’m done. I am not tired of training, but I think it is the right moment after three years”.

Feelings
“I feel good, this shouldn’t be a sad day. It is not a happy day because saying that I’m leaving is not an easy thing. This is the time to say “see you soon”. I will always be close to this club. I know a lot of people here and my relationship with the club will not change”.

When the decision was made
“I want to encourage serenity, hard work and grit. That is how the club is. I had the respect of everyone and that is fundamental to achieve great things. The players had nothing to do with my decision. I think it would be tough to keep winning after three years of winning the Champions League. I don’t see our future approach to things clearly and I’m a winner, so if I don’t feel I can win I have to change something. I’m not going to blame anyone. I’m leaving. I’m not going to elaborate on when I made the decision, that’s for me to know”.

“When I make a decision I don’t do so lightly. I thought hard about it and I’m not going back on it. This will not change my relationship with the president. That’s what I think about it”.

Cristiano
“He has nothing to do with my decision”.

Would you have stayed if you had lost in Kiev?
“I’m not sure, Perhaps”.

Making decisions regarding the squad
“This did not influence my decision. That is part of a coach’s job. Twice I looked at the issue of transfers with the president and what the squad needs. If you want to be a coach then that is an important part of the job. It is for the good of all the players: for me and my squad. We need a change in order to keep winning”. 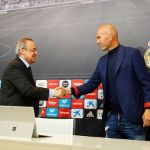