The fans filled the stadium to experience the culmination of the celebration of la Decimotercera with the team.
From Kiev to the Santiago Bernabéu. Twenty-four hours after winning la Decimotercera against Liverpool, the team and fans put the finishing touch to the celebrations of this unprecedented success with a big party at the Madrid stadium. After visiting the institutions and crowning the goddess Cibeles, the players enjoyed an event that has become a traditional in recent years, filling the stands at the Santiago Bernabéu.

Presented by Miki Nadal, the show featured giant screens and a big lights and sound show that welcomed the champions. First it was the turn of Real Madrid basketball, who paraded la décima European Cup to the fans. Then, the lighting of the stadium went out and images were projected remembering the 13 European Cups in football.

It was the prelude to the appearance of the stars. Zidane and his coaching staff opened the way. Then, one by one, the 24 players were presented: Luca, Ceballos, Kovacic, Isco, Mayoral, Asensio, Achraf, Llorente, Lucas Vázquez, Theo, Casemiro, Casilla, Bale, Modric, Kroos, Nacho, Varane, Vallejo, Carvajal, Keylor Navas, Benzema, Cristiano Ronaldo, Marcelo...

... And the last one to appear, was captain Sergio Ramos holding the Champions League. The squad raised the trophy to the Madrid sky while the fireworks went off and We are the Champions rang out around the Bernabéu. Then, Zidane, Ramos and Marcelo took the floor to thank the fans for their support and to promise them more successes: "We are going for la Decimocuarta", said the captains.

Legend’s photo
The party continued with a photo for the history books. The football and basketball squads, European champions in the same year for the first time in history, congratulating each other on the pitch and posing together with the trophies. A perfect culmination to a celebration that ended with a lap of honour and lots photos to remember. The memory of another legendary season for the best club in the world. 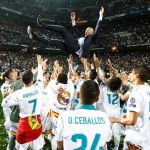