Real Madrid club president, Florentino Pérez, led the Whites as they posed at the Palacio de la Zarzuela with the monarch and Euroleague trophy.
King Felipe VI was at the Palacio de la Zarzuela to meet Real Madrid's basketball team, who on the 20th May won the Euroleague in Belgrade. Florentino Pérez, members of the Board of Directors and the basketball squad posed with the King and their Tenth European Cup. The captain, Felipe Reyes, gave the King a personalised t-shirt with his name.

The Real Madrid president said: "This tenth European Cup shows the values that underpin our club, we won it in what has been one of the hardest and most difficult seasons. Along with our coach, Pablo Laso, this team have set a precedent for hard work, humility, being united and constantly looking to improve". 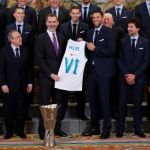