The Real Madrid player is in the ideal five and got the Rising Star award for the second year in a row.
Luka Doncic took the plaudits at the Euroleague award ceremony, which took place prior to the final in Belgrade. The Real Madrid player was named MVP of the Regular Season, the biggest individual prize in the competition, beating Vesely (Fenerbahçe), De Colo (CSKA Moscow), Shengelia (Baskonia) and Calathes (Panathinaikos). The youth team star got the Rising Star award for best player under 22 for the second year running, and he is in the ideal five.

Youngest-ever winner
What's more, Doncic becomes the youngest player to land the MVP for the EuroLeague Regular Season. At just 19, he claimed the accolade at a younger age than Teodosic and Sergio Rodríguez, who both received the award at 27. Meanwhile, he follows up on the distinction awarded to fellow madridista Sergio Llull, who scooped the MVP honours last season. Real Madrid is the third team in the competition's history to win the award in consecutive years. The first team was Maccabi (Parker in 2005 and 2006) followed by CSKA (Papaloukas in 2007 and Siskauskas in 2008).

Doncic expressed his satisfaction at being named the MVP: "I want to thank everyone who voted for me, the fans and my teammates. I've got some brilliant teammates who help me to improve my game every single day. The key to winning this award is to have fun out on the court and work hard". 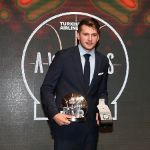