The Portuguese forward had a great year in which he won the Champions League and the European Championships.

Cristiano Ronaldo had a fantastic year in 2016 and he was recognised for it by receiving his fourth Ballon d'Or. The Portuguese forward received 745 points in the vote made by journalists from around the world chosen by the publication France Football beating Messi (316) and Griezmann (198). Cristiano scored the decisive penalty in the final of  la Undécima where he was also the top scorer with 16 goals. In the summer he led Portugal to their first ever European Championship. To close the year, he scored a hat-trick in the final of the Club World Cup, where he was also names as the best player in the competition.

During 2016, he also won another European Super Cup and on an individual level won the UEFA Best Player in Europe award for the second time. With another Ballon d'Or, Cristiano Ronaldo adds to his legend in world football, where he already stands out as the top scorer for Real Madrid, in the European Cup, the Portuguese team and the only player with four Golden Boots.

9 winners of the Ballon d'Or have played for Real Madrid.

The forward showed his joy in an interview after receiviving the trophy: "It is a great honour to get my fourth Ballon d'Or. I am very happy and proud to receive it, and I want to thank all my team, my teammates at Real Madrid and in the Portuguese national team".

Cristiano Ronaldo also extends Real Madrid's relationship with the Ballon d'Or. Along with the Portuguese forward, eight other players who have worn the Real Madrid jersey have won this accolade at some point in their career. The Portuguese received congratulations from his teammates during the Club World Cup in Japan.

Other Real Madrid players
The Whites had the most representative in the list of 30 candidates for the 2016 Ballon d'Or, with six players. After Cristiano Ronaldo’s triumph, Bale finished 6th (60 points), Pepe 9th (8) and Kroos and Modric tied in 17th place with 1 point each. Ramos was part of the group of 11 players who did not get any points. 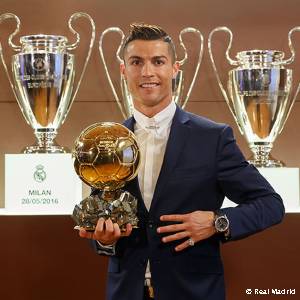