They defeated Red Star in a final that was decided in the last minute.
Real Madrid's junior team were crowned champions of the Adidas Next Generation Tournament, the Euroleague of their age group after beating Red Star, who were defending their title, in the final. The Whites who were cheered on by more than a thousand supporters in the Palacio, overcame a bad first quarter to turn the game around and seal the win in the final minute. Barreiro (19 points and a PIR of 21) was the best player. Doncic (14+11 rebounds), Yusta (15+ a PIR of 18) and Samba (6+11 rebounds) were also outstanding. Florentino Perez watched the final and congratulated the champions.

The current champions began the game dominating in a first quarter, where their smaller men, Aranitovic and Radonov, set the pace of the game, while their dominance over attacking rebounds tied Madrid down (15-22). In the second quarter, the junior side closed down rebounds on their basket and began to run. The trio of Barreiro-Yusta-Doncic emerged (29 of the 39 points at the break) and Paco Redondo's men turned the game around. The score went from 18-24 in the 11’ to 28-24 in the 15’. During those four minutes, Doncic (8 points) led a 10-0 run. Barreiro continued to crack open the Serbian defence with his three pointers (3) and Madrid went into the break two up (39-37).

The game continued to be very even until mid-way through the third quarter, when the Whites became more aggressive. With Samba and Cate at the back and Rico leading, the team used the attacking talent of Doncic, Yusta and Barreiro to reach their maximum lead in the 29’ minute with the score at 59-49. If it was not for the quality of Stojanovic and Aranitovic, Madrid would have had a much greater advantage.

Defence and character
In the last quarter the pressure of fighting for the title really began to show and the defences took centre stage. Red Star moved better, taking advantage of points from Aranitovic and their dominance of offensive rebounds led by Simanic, in order to gradually reduce the Whites' lead until they were one point down with ten seconds to go (71-70). However, the junior side once again showed their best defensive form recovering two decisive balls. Barreiro scored two free throws to make it 73-70 and in the last move of the game who prevented a comfortable basket from the opponents (73-70). 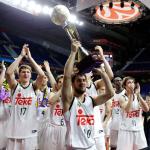