“This alliance will help us become even greater as well as carry out a series of decisive projects for the club's future”, stated Florentino Pérez.
The presidential box in the Santiago Bernabéu was the setting for the presentation of the agreement between Real Madrid and IPIC (International Petroleum Investment Company), the objective of which is to globalise the club's assets and turn the Santiago Bernabéu into the greatest sporting venue in the world. Among those in attendance at the ceremony were Florentino Pérez, the Real Madrid president; his Excellency Khadem Abdullah al-Qubaisi, chief executive of IPIC; and the football first team squad.

Florentino Pérez highlighted the importance of this alliance: “Titles and victories are always the starting points here. We want to continue building the greates legend in the history of football. As such, the agreement we have signed with IPIC today is a strategic agreement that allows Real Madrid to meet its commitment to its past, present and future”.

Strategic alliance
“IPIC is an important ally that shares our values and will help us develop and strengthen the Real Madrid brand even further in every continent. A strategic alliance that will help us become greater and carry out a series of decisive projects for the club's future".

"This is the beginning of a long relationship and the start of a powerful alliance that could be key to us meeting one of our greatest challenges: turning the Santiago Bernabéu into the greatest stadium in the world”.

“This alliance will also strengthen the club's heritage. It will help develop the Museum in such a way that Real Madrid can hold international exhibitions so that fans are able to see the Museum's contents wherever they may be. Our legend should be even easier for our supporters to access”.

The Foundation's schools
“IPIC's leadership and great global presence allow for the development of fantastic social work. This charitable commitment which we share is going to help in the expansion of over 350 of the Real Madrid Foundation's socio-sporting schools around the world. Together we will fly the flag for charitable endeavour”.

Proud to join up with Real Madrid
His Excellency Khadem Abdullah al-Qubaisi, the chief executive of IPIC, also evaluated the agreement: “We are very proud to join up with Real Madrid, the most important football club there is. This agreement will allow Real Madrid's epic football to reach the whole world. It will allow the club to globalise its assets and legacy. We also share the vision of turning this stadium into a venue of sporting excellence”.

Exchanging of gifts
IPIC will also become the official licensee for Real Madrid's sporting schools in the United Arab Emirates as well as in other yet to be confirmed territories. There was an exchanging of gifts after the agreement was signed. Florentino Pérez presented a replica of the Bernabéu and in turn received a commemorative trophy to celebrate the agreement. 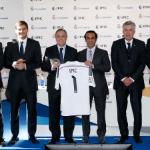