Second period
“This event has very special connotations. Today, Real Madrid has reunited its name with a multinational company that is committed to this club and that formed a part of our history several years ago. It is a company that is perfectly familiar with the values, demands and dreams of this club”.

"The first step of the new season starts here with this partnership. We desire the ninth European Cup, we want nine titles and to be able to return the affection our supporters give us”, concluded Real Madrid’s president.

Baldasano: "We hope to achieve the same success"
Arturo Baldasano, president of Teka, then took the floor, stating: “We hope that in this second period Real Madrid basketball achieves as much success as in the first one. Teka is a leading brand and that is why we would like to sponsor Real Madrid. We have added a new element that sets this apart, which is the sponsorship of the basketball team". 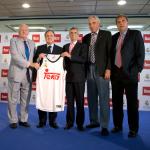