0
Real Madrid played their first Liga match in 14 days and keep pace with Atlético and Barcelona. The Whites opened the scoring early on against Osasuna. They only needed six minutes. Cristiano Ronaldo surprised Andrés Fernández with a long range effort, and the visiting goalkeeper could only watch as the ball sailed past him into the net. The league's top scorer scored on his return and put his side ahead.

Real Madrid had done the hardest thing, but continued looking for another goal to move further ahead. They were close to doing so on the stroke of half an hour. Cristiano Ronaldo's free kick flew centimetres wide of the Navarra side's goal. The Whites created a lot of danger from dead balls, and the connection between the Portugal forward and today's captain Ramos almost lead to a goal; the latter volleying over from the former's free kick in the 37th minute.


The home side were totally rampant, and two minutes later Andrés Fernández saved his side with a double stop. The first was from Marcelo's strike on the edge of the box, then with a reflex save from the rebound from Morata, fired in from the penalty spot. The Whites could have had the game finished before half time.

Cristiano Ronaldo was decisive
The opening minutes in the second half weren't too dissimilar to those of the start of the game. The protagonist, once again, was Cristiano Ronaldo. Having only needed six minutes in the first half, this time he had to wait a minute longer to increase the lead. The Portuguese took the ball down on the edge of the box and found the top corner of the opponent's goal with a super striker. It was another stunner by the forward, who now has 30 in the league, and has breathing space at the top of the scoring charts.

Two defenders sealed the goalfest
Real Madrid scored their third on the hour mark. Ramos started and finished the move. His efforts throughout the game got their deserved reward. Di María crossed and the Spain international headed home. He has 36 goals in league football, and sits alongside Capdevila as the top-scoring active defender in the competition.

Ancelotti then decided to give Cristiano Ronaldo, Modric and Di María a break, all of whom left the pitch to standing ovations for Casemiro, Xabi Alonso and Carvajal respectively. It was the full back who rounded off the scoring. Isco played the ball over the defence and the academy graduate climbed higher than Andrés Fernández in the 83rd minute. Real Madrid scored plenty, finished with a clean sheet and are now thinking about their Champions League semi-final second leg against Bayern Munich. 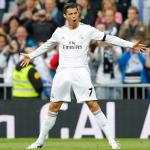