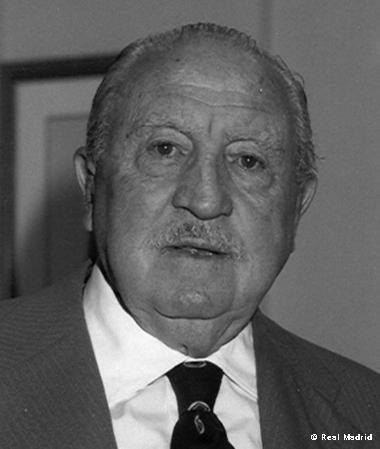 Santiago Bernabéu represented so much in the history of Real Madrid that sometimes it is difficult to distinguish the man from the club. He devoted all of his life to football and his beloved team and gave his all for the institution as a player, trainer, director and president. He was the man responsible for making Real Madrid a truly great club and giving it the international prestige and the fabulous facilities that the club has today.

Thanks to his ability as a player, at the age of 14 Bernabéu started playing for the Real Madrid youth team. Three years later, he made it to the first team where he soon became captain. He was noted for his fierce independence, his honesty and his readiness to make sacrifices for his beloved team. He finally hung up his boots 15 years later in 1927 and joined the board of directors where he remained until 1935.

At the age of 20, he finished his degree in Law and in 1943 he was elected president of Real Madrid. He organized the club into different sections in which a different person was responsible for each area of the club, established professional coaching teams and gave strong institutional support to fan clubs known as “peñas”. He also promoted new sports at Real Madrid (basketball, handball, tennis, etc.) and built the new Chamartín Stadium and the Sports City training facilities. He made sure that Real Madrid signed the best players of the time including Alfredo Di Stéfano. He both supported and helped to create the European Cup competition (now known as the Champions League).

In 1955, the board of directors changed the name of the club’s ground from the Chamartín Stadium to the Santiago Bernabéu Stadium. His presidency was unique in the history of world football and he was the man who put Real Madrid right at the top He won 6 European Cups, the Intercontinental Cup, the World Club Championship, the Spanish League and the Spanish Cup among other honours. Five of the six European Cups were won consecutively and this meant that the club was allowed to keep the original trophy. Every year, Real Madrid host the Santiago Bernabéu Trophy game in his honour.