Another big win on the road 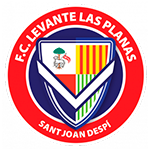 Real Madrid overcame Levante Las Planas thanks to a brace from Esther and further goals from Athenea and Feller.

Real Madrid keep their unbeaten run away from home going into matchday eleven of the league season after overcoming Levante Las Planas. Alberto Toril's side went ahead thanks to a first-half brace from Esther. The home side pulled one back during the second half, but Athenea (64') and Feller (85') sealed Real Madrid's third consecutive win, eighth in the league this campaign.

Real Madrid took control early on and again demonstrated how clinical they have been this season by converting their first shot on goal of the game. The move began with a challenge from Feller and was finished off by Esther, who picked up the Frenchwoman's pass to open the scoring with a shot just inside the post from the penalty spot (4'). Real Madrid sought a second and almost got it with 22 minutes gone as Teresa's shot went just wide after good play between Esther and Weir. Just over half an hour in and Lucía crossed from the right flank to pick out Esther at the far post, who beat Doris (34') for the second goal of the game and her second of her career. The Madrid player's twelfth goal of the season and seventh in the league. Zornoza could have added a third shortly before the end of the first half with a shot that struck the post.

Video.1-4: Another big win on the road

Athenea and Feller sealed the win
Levante Las Planas pulled one back through Irina Uribe in the second half, beating Misa one-on-one in the 56th minute. Real Madrid reacted well, and Athenea was on the scoresheet again in the 64th minute after a good move, with the forward arriving late to slot home the third goal. The game was wide open in the final 20 minutes, but Misa stepped up to save Julve's shot range in the 71st minute. Feller sealed the win in the final stages with a right-footed shot after Maite Oroz's pass with the outside of her boot (85'). Another win for the madridistas, who are now looking towards the Women's Champions League match against Chelsea next Thursday, 8 December at the Alfredo Di Stéfano stadium (9pm CET).