“You've accomplished your big dream of playing for Real Madrid. You chose this crest and shirt, with which we've lifted the European Cup 14 times", declared club president Florentino Pérez.

Aurélien Tchouaméni has now been unveiled as a new Real Madrid player. The unveiling ceremony took place at Real Madrid City and got underway with the screening of a video featuring the player’s best moments, after which club president Florentino Pérez gave an address: “We're already thinking here about winning the Decimoquinta. That’s the big dream now for all of us who are united by this universal allegiance that is madridismo. We're working intensely to achieve it and once again accomplish something that to many may appear to be impossible. We've got a great squad. Several of our players have achieved a new feat in the history of the game and after lifting five Champions League titles in the last eight years.”

“But today, we’re convinced that the player who is joining Real Madrid is one of those great players who will help us to continue to improve and make our club members and supporters even happier. Today we're here to welcome a young player who is already one of the best midfielders in the world. I congratulate you because today you’re accomplishing your great dream of playing for Real Madrid. At just 22 years old, you had the opportunity to choose and you opted for this crest and shirt, with which we've lifted the European Cup 14 times.”

Real Madrid’s greatness
“Today marks the start of a chapter in your life that’ll you’ll be proud of. In a few minutes’ time, you’ll pull on the Real Madrid shirt for the first time. This shirt represents the biggest legacy in the history of the game and when you wear it, as well you know, we never give up. From now on, you’ll experience some unique feelings and moments that’ll stay with you for the rest of your life. In particular, you’ll feel  a force that’s difficult to put into words, the force of the Santiago Bernabéu, where the madridistas will help you to understand everything that we have stood for, everything that we stand for and everything that we can become. You’ll have witnessed and been told about the magic that’s created within our stadium, but you will now get to discover for yourself why this club is the greatest in the world.”

Tchouaméni: “Real Madrid are the greatest club in the world”
The new madridista recruit addressed the media following the president’s address and had the following to say in Spanish: “I'm really happy to be here and starting my story with Real Madrid, the greatest club in the world. I'm going to work really hard to help the team to continue winning trophies. I thank the president and my family for being here and Hala Madrid!

Contract
Prior to his unveiling, Tchouaméni  put pen to paper on his six-year contract in the boardroom at Real Madrid City, where he was joined by Florentino Pérez. After signing the contract, the Frenchman was presented with a watch, a replica of the Santiago Bernabéu and a shirt with his surname and the number 18 on the back. 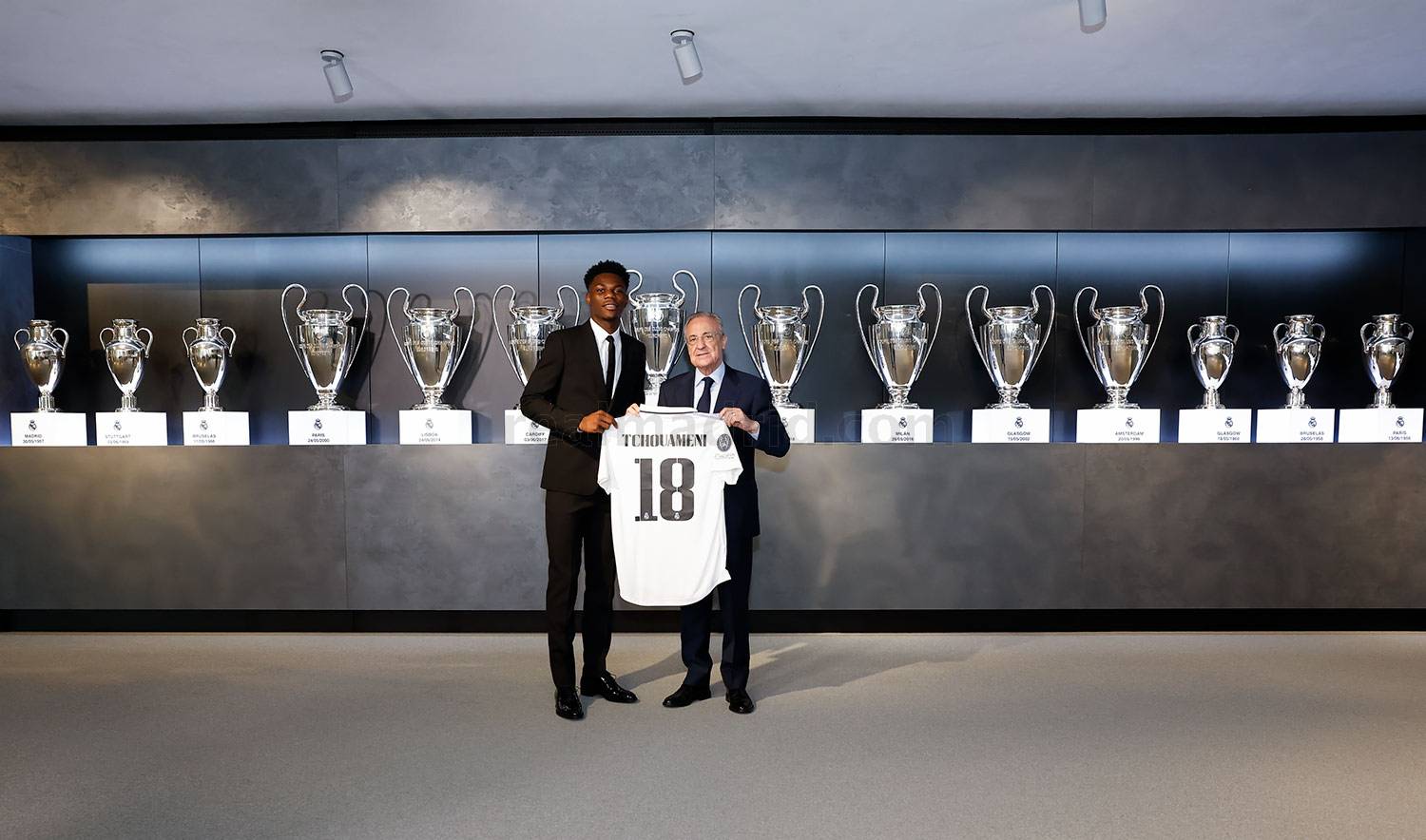 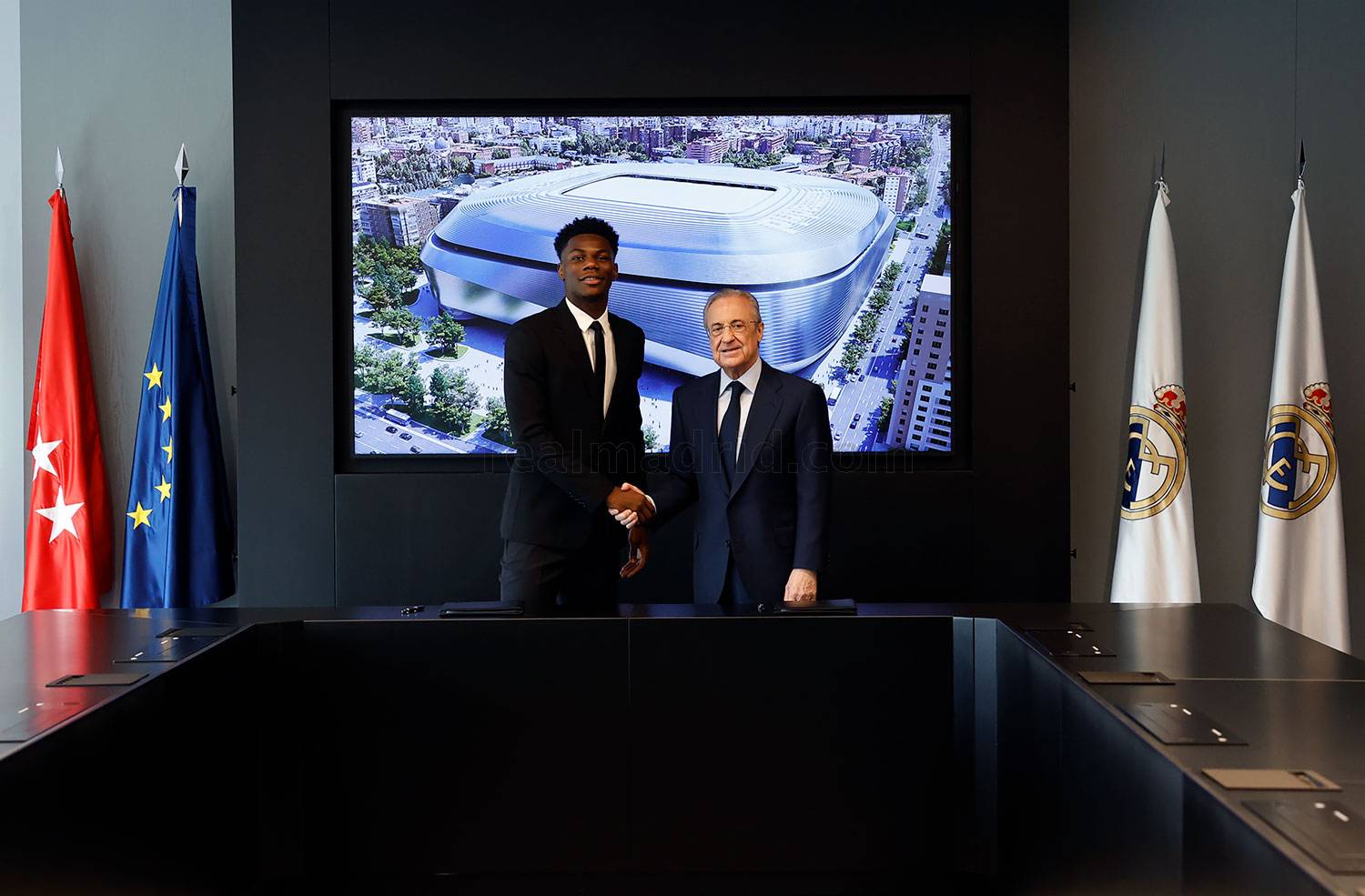 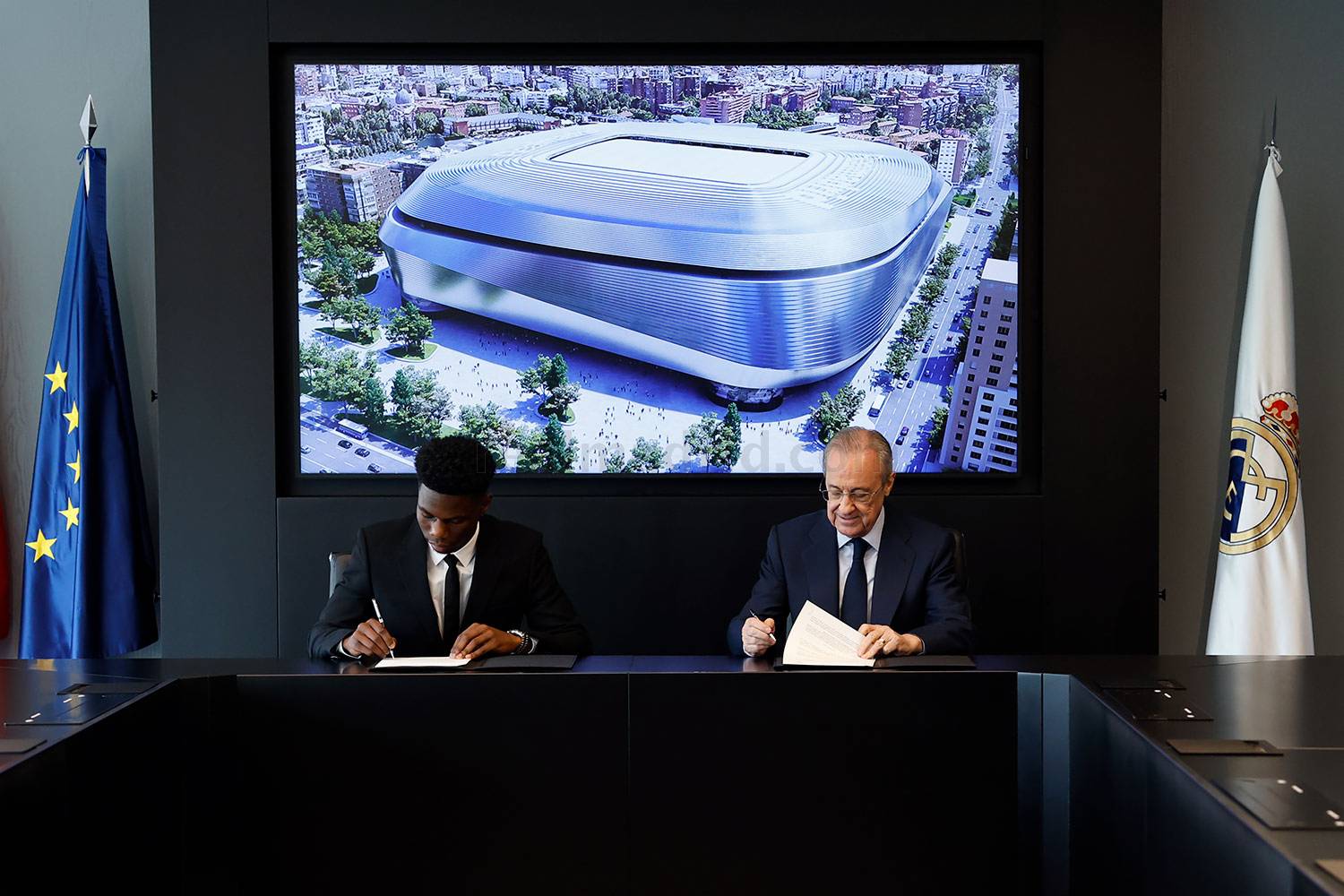 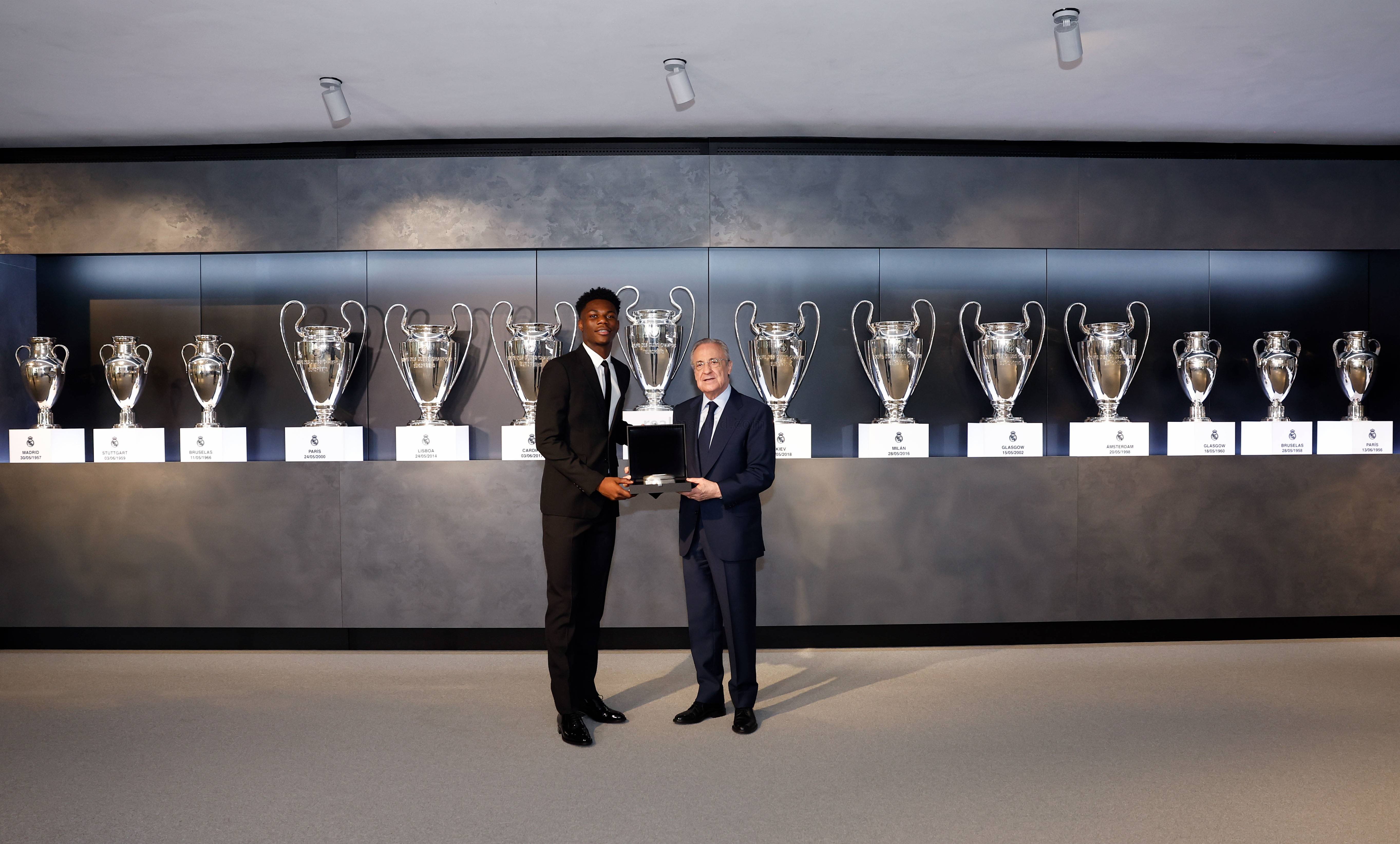 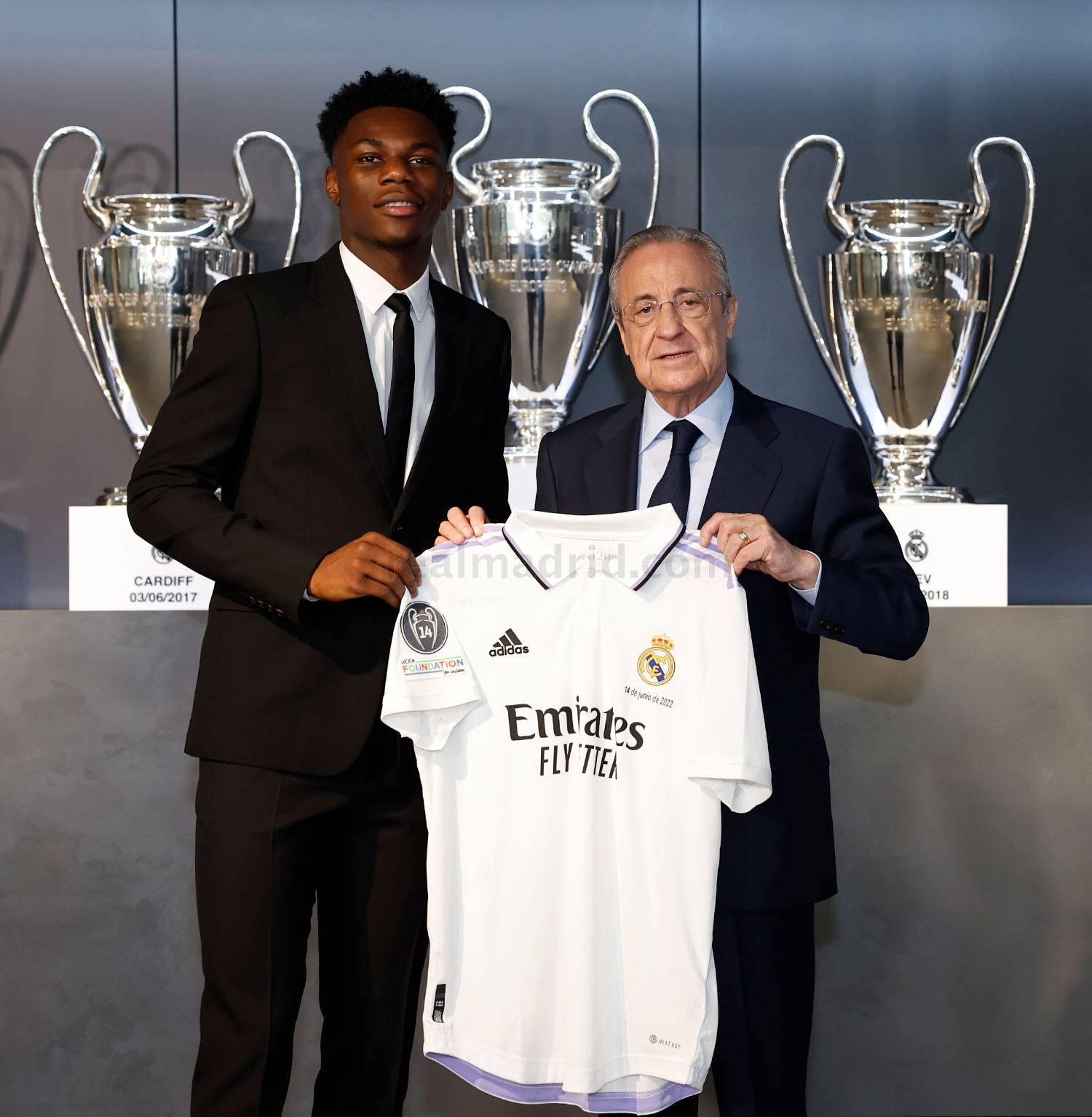 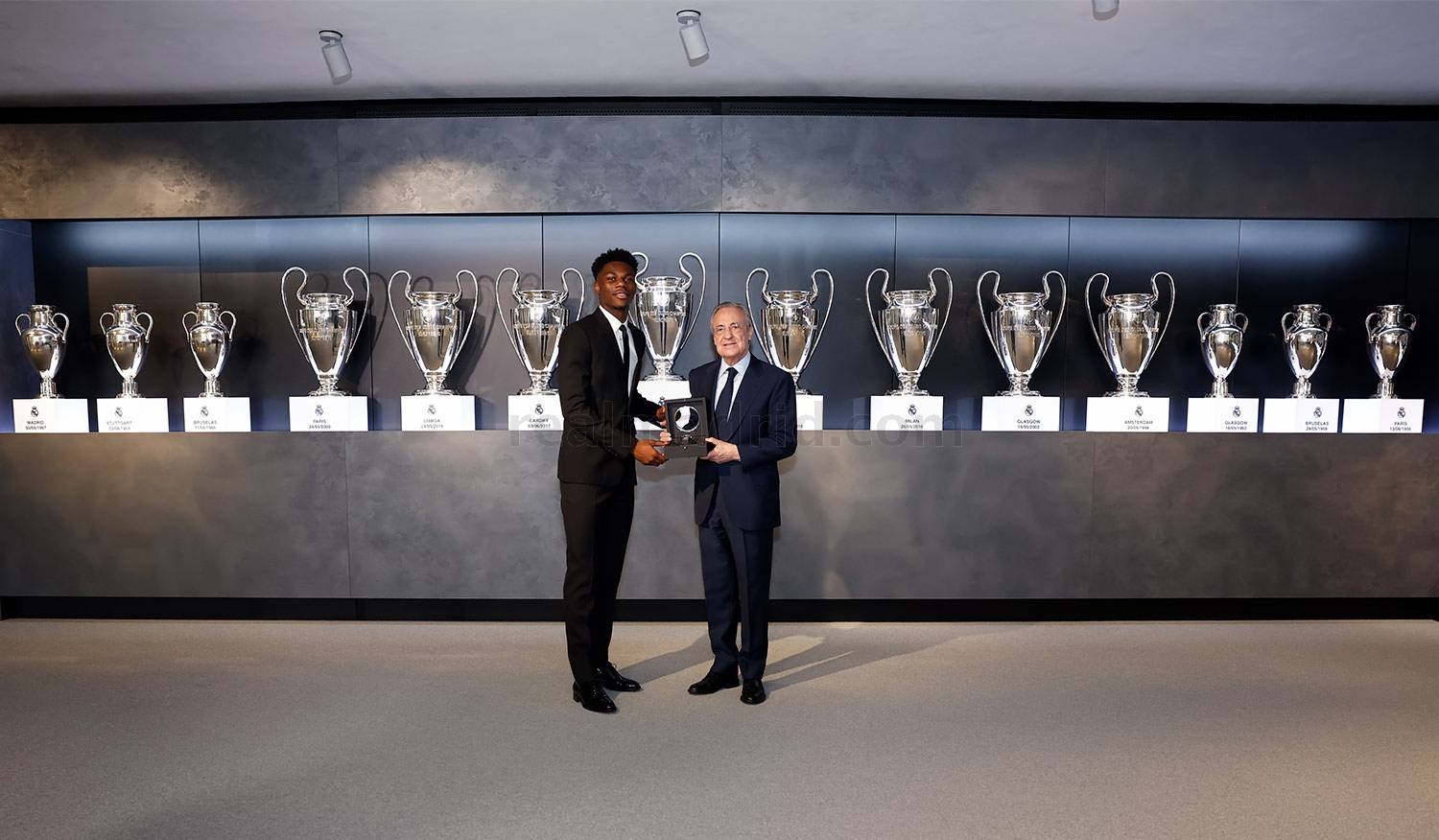 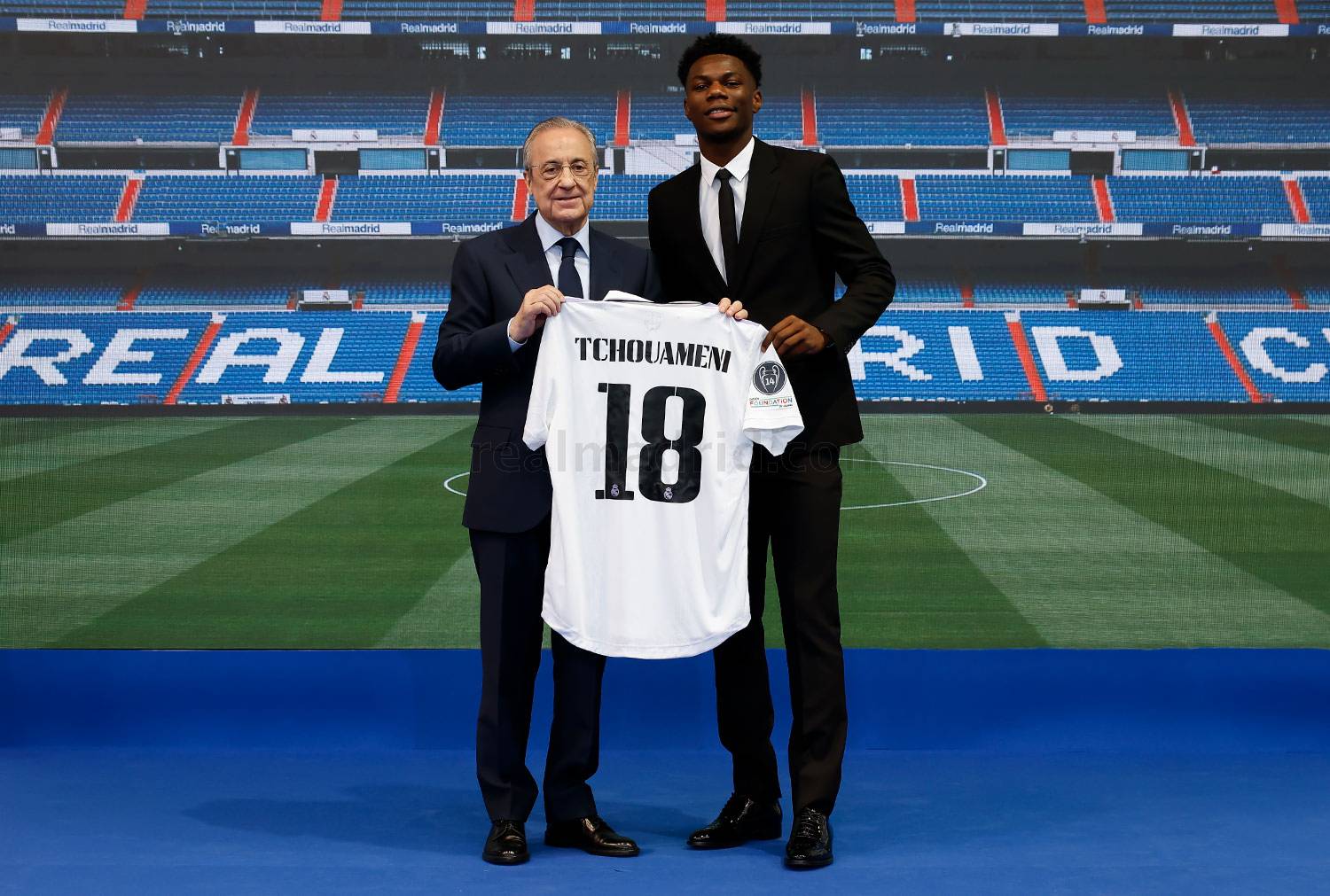 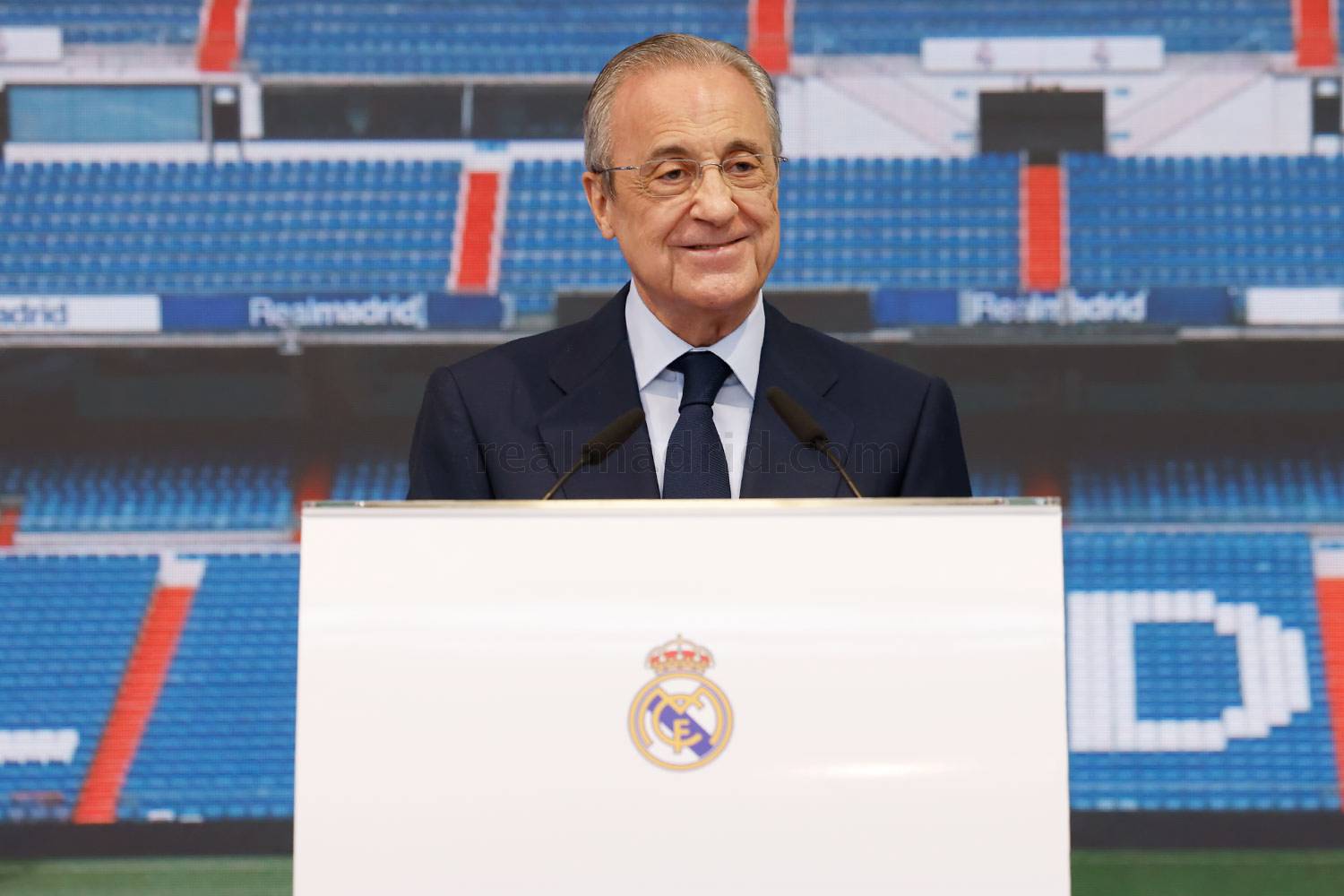 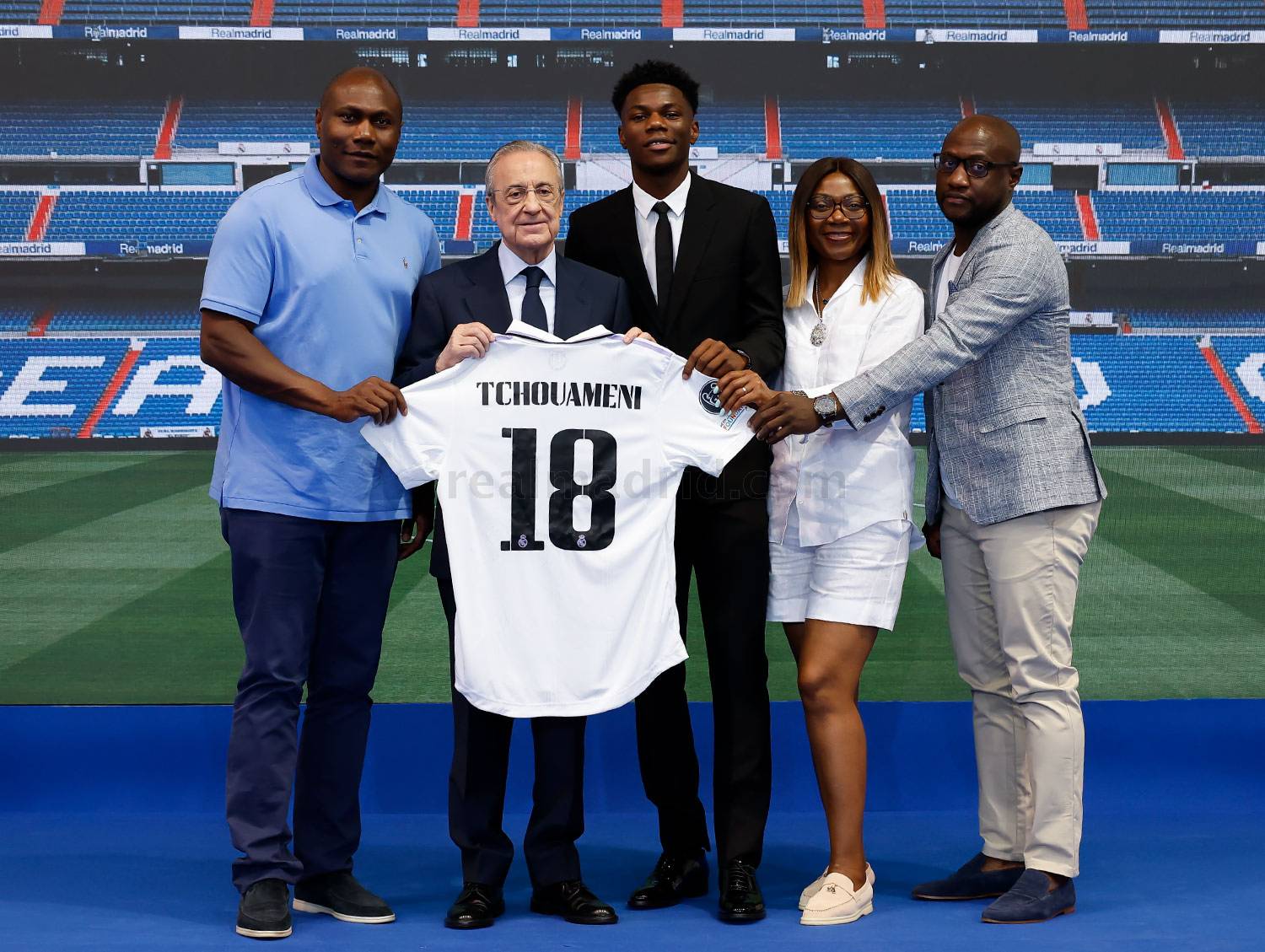 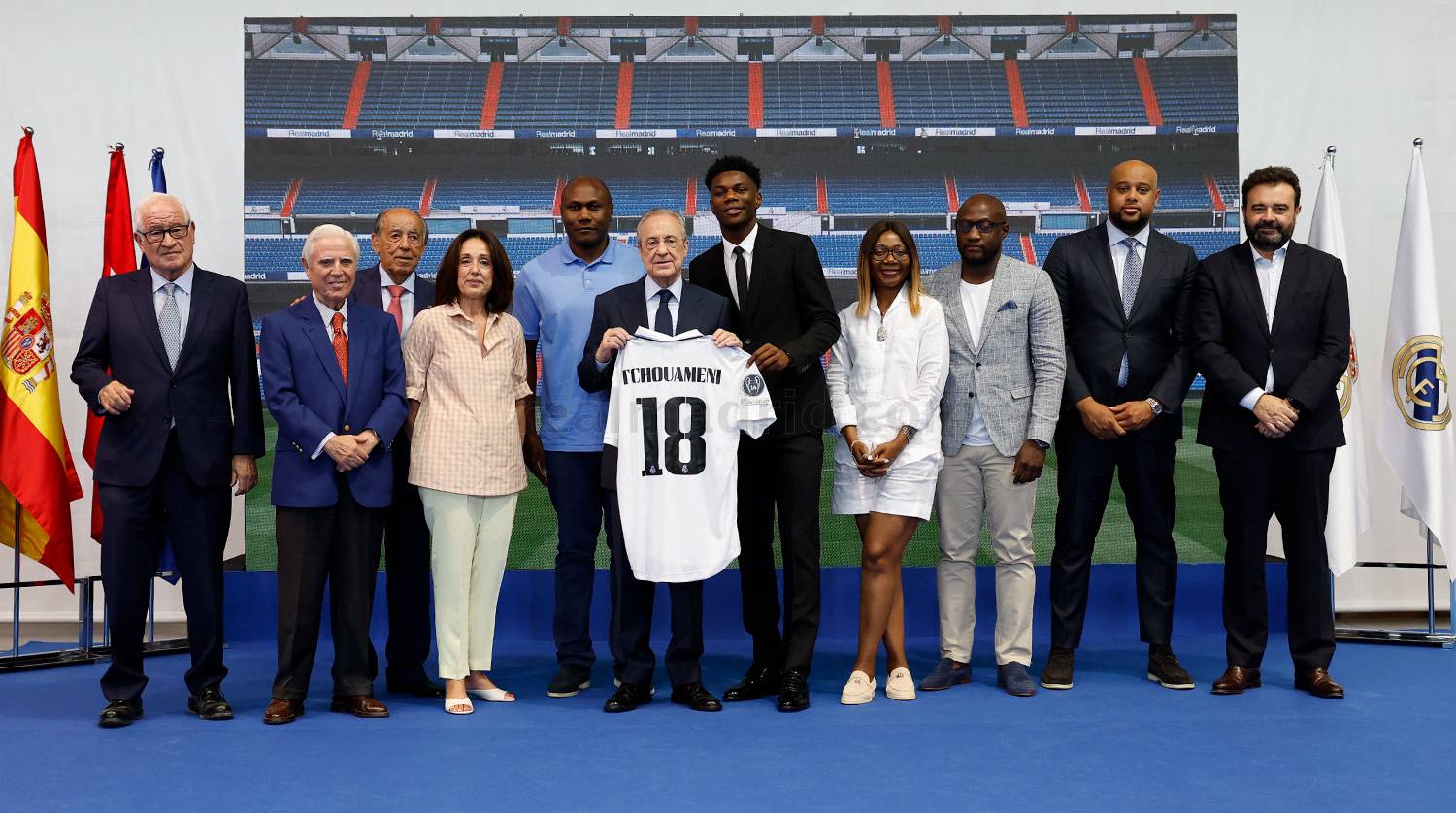