65
Real Madrid beat UCAM Murcia in the Costa del Sol Tournament and are now turning their attention to the Super Cup semi-finals against Lenovo Tenerife in a week's time (Saturday, 10pm CEST). Laso's team put in their best their performance of pre-season dominating from start to finish, leading by as many as 23 points and displaying a strong defense. Poirier, with 17 points and 20 PIR, was the standout performer, along with Abalde (13), Causeur and Alocén (11 each).

Real Madrid set the tone early with a good first quarter showcasing many of their strengths for this season. The team came out focused, not allowing UCAM Murcia easy shots and dominating the rebounding. In attack they scored both on the inside, with Poirier imposing himself on his opponents, and on the outside, with succes on the three-pointers (4) and with everyone contributing (23-14, min.10).

A very solid Madrid
Pressure on Murcia's outside line, along with the defence on their blocking and continuation, kept Sito Alonso's team in check, with Taylor playing a key role to keep them in the game. But Madrid operated smoothly with every player who took the court playing their part. Williams-Goss, Abalde, Taylor and Causeur were good around both hoops, the best  for the team in the first half with 11 points. They all contributed from the perimeter to open up a gap on the scoreboard at 37-20 in the 17th minute. UCAM Murcia had a mini-fightback thanks to McFadden leaving Laso's team 12 up at half-time (39-27). Heurtel had to make his way to the dressing room after spraining his ankle just before the break.

UCAM Murcia were more aggressive at the start of the third quarter. Two three-pointers brought the score to 41-35 with 23 minutes gone. Madrid kept their composure and halted their opponents' recovery, with Alocén and Poirier making the difference. Between the two of them, they shared the points to give the team a comfortable lead of over ten which was held for the rest of the quarter (60-46, min.30).

Convincing win
Real Madrid took the game away from the Murcians. Showing their strength as a team with a top defensive performance. Alocén was in charge of putting an end to the rival's hopes thanks to his repertoire of shots (he finished with 11 points) and the team went on to lead by 23 points at the midway point of the last quarter with the scoreboard showing 73-50. Juan Núñez also got his minutes and with the match settled and the victory in the bag, UCAM Murcia clawed back the score (80-65, min.40). An exciting season begins in seven days. 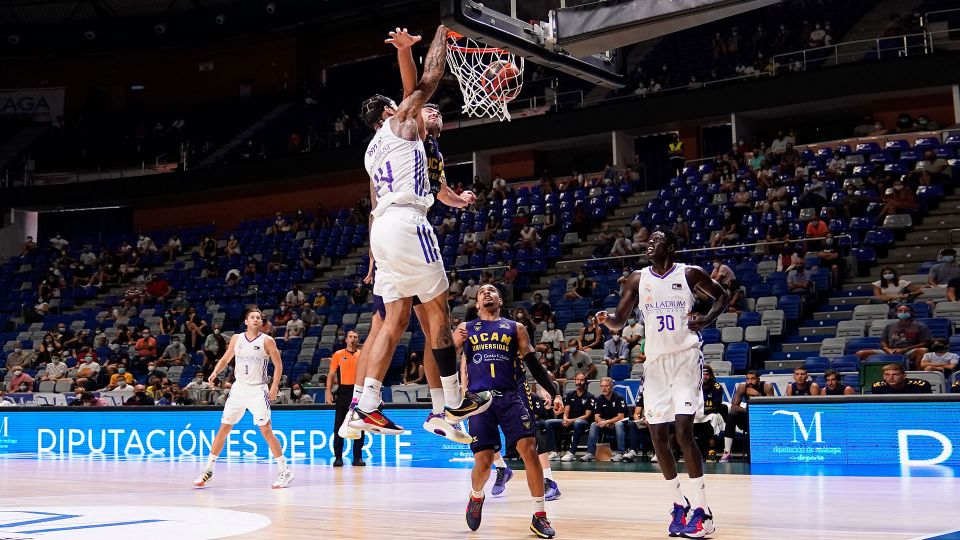