The match went the way of the Andalusian team in the final quarter.
Martín Carpena

88
75
Real Madrid fell to defeat against Unicaja de Málaga in the Torneo de la Costa del Sol in an evenly fought match that was close for the first three quarters but went the way of the Andalusian side in the final moments. Laso's men, who had Rudy and Abalde back having missed out on the first friendly, enjoyed the best of the early minutes of the second quarter but lacked consistency following the break. Heurtel, with 11 points and a PIR of 13, was the team's key man.

An identical start to last Wednesday's game in Albacete, this time with Unicaja dominating the scoreboard since the tip-off with superior accuracy and pace in their game. After a 17-4 run against, Real Madrid swung into action, especially up top, where three-points were the key weapon in a first quarter that finished 28-16 to the Malaga side, in a game which served as a tribute to Carlos Cabezas, who has recently retired and played the opening minutes for the host.

Madrid react
The second quarter was a whole different story. Madrid stepped it up in defense, showing increased aggression. Unicaja were less comfortable now and Laso rotated to give the offense a boost, with Heurtel, Rudy and Hanga all performing well. The point guard was dictating the play and the forward took care of the point-scoring. Eight successive minutes for the Spaniard and another five for the new madridista reinforcement took the team on to open an impressive run and get back within a few points of the opposition in the second 10 minutes. A 27-19 meant they were just four down at the break (47-43).

Unicaja took off again at the start of the second half. A cold and rushed Madrid had no response for the hosts' accuracy, lead by Abromaitis (58-46, min.25). They refused to lie down though, and managed to turn the situation around through their grit and determination at the back. Causeur and Heurtel kept things going in offense, taking the team to within four points at 53-59 with 29 minutes on the clock. But Laso's men still lacked consistency, switching between good spells and poorer ones. The Andalusians took advantage of that to hit them on the break and from distance to open up a +14 advantage with five minutes left, and would ultimately be enough to take the win (88-75, min.40). In 24 hours' time, the madridistas face their next pre-season test against UCAM Murcia. 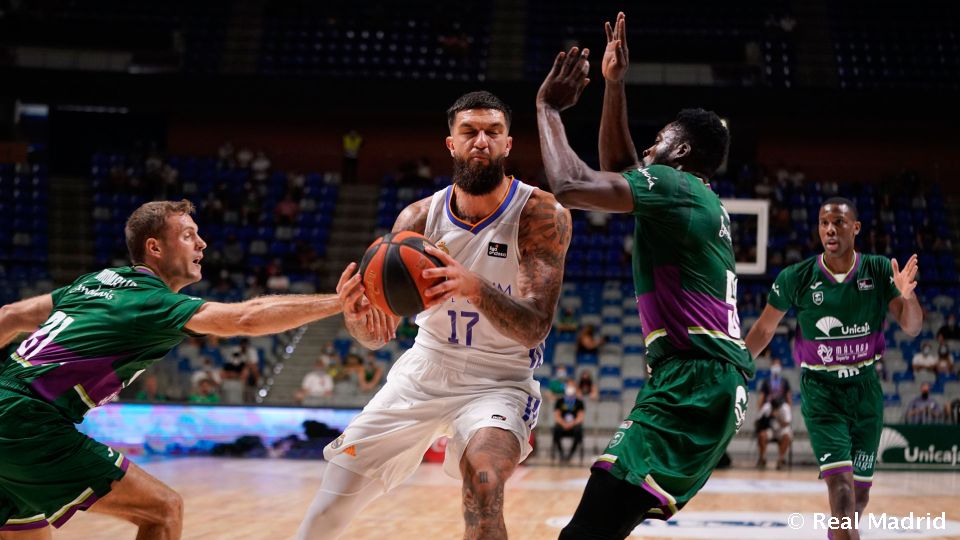