Our team heads to Glasgow to face the reigning Scottish Premiership champions at Ibrox (7pm CET).
Following on from three weeks of intense work at Real Madrid City, this evening sees our side face their first action of the pre-season campaign as Real Madrid pit their wits against Rangers F.C. at Glasgow's Ibrox Stadium (7pm CET). This outing will see the team continue its preparations ahead of the 2021/22 season, which kicks off on 14 August, when Alavés are the visitors on Matchday 1 of the LaLiga campaign.

The Whites' squad travel to Glasgow keen to get some minutes under their belts and get up to speed following some tough sessions at Real Madrid City that have included training matches against Fuenlabrada and Rayo Vallecano. With several squad members recently having joined pre-season training after having been at the EURO, this match will provide Carlo Ancelotti with the chance to continue testing various systems with the players at his disposal.

Steven Gerrard's Rangers secured the league title last time out after going unbeaten throughout the 38-game season. The Glasgow outfit are also Scotland's most decorated club, with 55 trophies to their name. The hosts have announced that up to 12,750 fans will be able to take their places inside Ibrox, where Real Madrid have previously played one competitive fixture. The match came in the 1963/64 European Cup and saw the Whites rout out 1-0 winners courtesy of a Puskas strike. 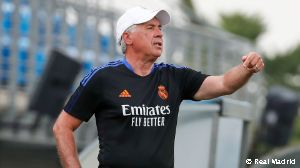