The team will be hoping to take all three points from the Nuevo Los Cármenes to remain in the hunt for the league title (10:00pm CEST).
With everything still to play for, Real Madrid head to the Nuevo Los Cármenes tonight to take on Granada on matchday 36 in the league (22:00pm CEST). It's the first of three cup finals in the battle for the LaLiga title, and nothing but three points will do if the team is to remain in contention. The path to victory will be a repeat of the attitude on display on Sunday: a refusal to give in until the final moment.

The aim in Granada will be to take maximum points and the first step in the right direction during a hugely demanding week which sees Madrid face another tough away trip in three days' time, when they head to San Mamés to take on Athletic. The team are in good shape in LaLiga, unbeaten in their last 15 games, while they've come out on top in their last 11 against Granada, 5 on the road.

“We're going to give it everything we've got to win LaLiga”, said Zidane in the pre-match press conference. The coach will be without Ramos, Varane, Carvajal, Lucas, Marcelo and Mendy in the squad, but Hazard, does make the cut, fresh from netting the equalising goal against Sevilla. Indeed, the Belgian opened his goalscoring account for Real Madrid against none other than Granada last term.

Strong season
The madridistas' opposition are sitting in tenth place in the table on 45 points. Granada have enjoyed a fantastic season, making it into the Europa League quarter-finals, despite losing three of their last four LaLiga fixtures. The goals for Diego Martínez's men are spread between Soldado (9), Jorge Molina (5), Darwin Machis and Luis Suárez (4). 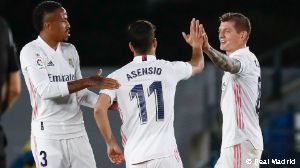