Zidane's side, who have gone 15 games unbeaten, return to the city of Cádiz in LaLiga for the first time in 15 years (10pm CET).
There’s no time for Real Madrid to rest in LaLiga in such a demanding month, as the Whites will play a total of eight matches. Zinedine Zidane’s side take on Cádiz in their second away fixture in the space of three days (10pm CET) and will be vying to record a victory in their fight for the league title. Madrid are currently three points behind Atlético and two points ahead of Barcelona, who have one game in hand – these teams will meet on matchday 35, Real Madrid beat both sides in the head-to-head battle.

Zidane's side, who have gone 15 games unbeaten (11 wins), return to the Ramón de Carranza stadium for a league match after 15 seasons. It will be the thirteenth time that the madridistas have visited the Andalusian side in the league. In the twelve previous matches, they have won seven, drawn two and lost three.

“We're going to give it our all against a tough side who defend very well”, said Zidane in the press conference ahead of the clash. The coach could welcome back Nacho and Casemiro, who were both suspended for Sunday’s game, along with Varane and Carvajal, who have recovered from injury. Benzema also travelled to Cádiz. The Frenchman, who has netted against 34 of the 35 teams he has faced in the league, could set a new record by becoming the first player to score against all 35 teams he has faced in LaLiga. The only player to come close to the Frenchman's tally would be Hugo Sánchez (33 out of 33).

Cádiz
The Andalusians are having a superb season on their return to the Primera División. They currently sit nine points above the relegation zone going into matchday 31 and will no doubt be a stern test for the Whites. Cádiz clicned victory at the Di Stéfano, drew at the Camp Nou and have only lost one of their last six games (three wins and two draws). Former Real Madrid player Álvaro Negredo is the top scorer for Cervera's side with seven goals. 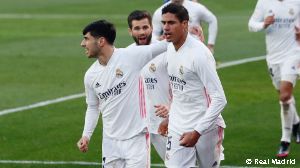