"There's still a long way to go in LaLiga and a lot of points at stake", said the coach.
Zinedine Zidane spoke to the media after the derby in a virtual press conference at the Wanda Metropolitano. The coach said: "Atlético were the better team in first half and we we the better team in the second, I think we deserved it. We had chances and got back in to it. At the end of the day the important thing for us was to put in another good second-half display and change the game, and we did that. It's a point, we're alive and we're going to keep fighting".

"Our aim is to keep fighting. There's still a long way to go in LaLiga and a lot of points at stake, we're going to fight until the end. Things can change quickly. We're doing the right things, although we know we can improve and that's what we're going to do. We wanted to play better in the second half today because the first half wasn't good. The attitude was very important to change things".

Referee
"I'm not going to get involved because we know it's a difficult job. The referee looked at it and made the decision. We have to respect that".

“It’s tough because we can’t get into that. We know the criteria, but it’s ultimately down to the referee and we have to respect the decision because we can’t change it. The players have told me it was handball, but he watched it back on the VAR system and decided not to give it”.

Valverde & Vini Jr.
“All of them deserve to play. Things won’t change, I have to name a starting XI and then make my substitutes. I’m really proud of all of my players because we’re all in the same boat and we’re going to battle on until the end”. 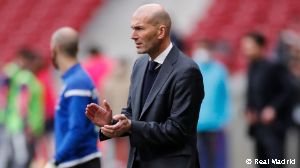