"It's an honour to receive this award, which wouldn't have been possible without my teammates", stated the midfielder, who was speaking from Real Madrid City.
Casemiro has been presented with the EFE Trophy for the Best Ibero-American Player in 2020 at Real Madrid City. The midfielder, who has been recognised after enjoyed a fine year with Real Madrid, during which he lifted the LaLiga title and the Spanish Super Cup, commented: "It's an honour to have received such an important award, and just like all of the individual awards, it wouldn't have been possible without my teammates. I want to thank my teammates for their help last season in what we achieved after what was a really tough year for us".

“Ronaldo, Roberto Carlos, Cristiano Ronaldo, Redondo… those names speak volumes of the importance of this award. I'm really happy and want to thank my teammates again and also EFE for giving me this award in a really tough but very special year for me".

Good form
"The best part of the season is coming up now because the important games are upon us. We've got the Champions League to come and there are 45 points to play for in LaLiga. We're ready, are on a good run and are performing well. We played really well against Valencia and we're on good form as we head into the most important period of the season, which is coming up now". 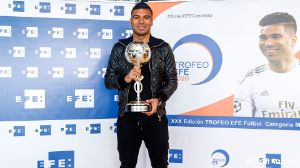