The team has gone seven games unbeaten and faces the Galician side in its first match of 2021 (9pm CET).
There’s no time to rest in LaLiga as Real Madrid are straight back in action for their first match of the new year. The Whites host in-from Celta Vigo (9pm CET) at the Alfredo Di Stéfano stadium, where they have recorded four consecutive wins (Borussia Mönchengladbach, Atletico, Athletic and Granada).

Zinedine Zidane’s side kick off a demanding first month of 2021, which will see the side play four times in LaLiga (Osasuna, Alavés and Levante the other opponents up next in the competition) and they will also begin their defence of the Spanish Super Cup (the team will face Athletic in the semi-finals). The whites will be aiming to maintain their impressive form which has seen the side string together an unbeaten run of seven games (six victories) and they have found the net in their last 11 matches in LaLiga.

“LaLiga is wide open and in this competition you have to work extremely hard to collect the points”, said Zidane in the press conference ahead of the clash for which he has named a squad of 23 players. The Frenchman will be without Rodrygo and Sergio Ramos, but Isco is available after recently becoming a father. Meanwhile, Karim Benzema has scored five goals in his past four outings at the Di Stéfano stadium.

The opposition
Celta go into the New Year in a rich vein of form. Eduardo Coudet’s side were in sensational form in December and have won six out of their last seven games. All eyes will be on Iago Aspas. The Celta striker is the top scorer LaLiga, with nine goals and he also has the most assists to his name so far this campaign (6). 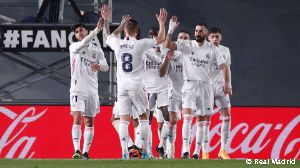