Matchday 16 sees the team travel to the Martínez Valero (9:30pm CET).
The LaLiga action returns after the Christmas break as Real Madrid travel to the Martínez Valero five years on from the team's last trip to Elche (9:30pm CET). This encounter, which sees the madridistas sign off for 2020, is the side's eighth outing in December and the visitors will be keen to continue the fine run that has yielded six wins on the spin.

Real Madrid head into the 16th round of LaLiga fixtures level on points with Atlético at the summit. Zinedine Zidane's troops will be aiming to reproduce the goalscoring form displayed over the course of the last 10 league matches, with the Whites registered in each of these games and notching 21 times in total.

"It's our last game of the year and we'll be trying to extend our good run”, commented Zidane in the build-up to the game. The French boss has named a 24-man squad for the trip to Elche as the team bring the curtain down on 2020. One player who takes his place in the squad is Karim Benzema, who has been on target in his last three outings to add four goals to his tally (a brace against Athletic, and a strike apiece against Éibar and Granada).

The opposition
Elche, who clinched promotion to the top tier following a gruelling play-off campaign, have settled in excellently to life in the top rung of Spanish football. Indeed, the hosts have tasted defeat just twice in their last seven league matches. The home side come into the matchday a point above the relegation places. Lucas Boyé and Fidel, who have three goals apiece, top Elche's scoring charts. 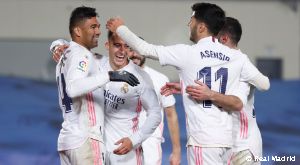