A Hazard penalty and a Rodrygo strike which was deflected off Hakimi, hand Real Madrid three crucial points in the Champions League.
San Siro

2
Real Madrid returned to the scene of the Undécima, the San Siro, to pick up three vital points in the fight to qualify for the Champions League Round of 16. The team paved the way for victory with a superb first-half display, going ahead when Hazard converted a penalty won by Nacho, before making sure after the break when Rodrygo netted with his first touch off the bench. Zidane's side put in a solid performance to secure second place in the group, a point behind Borussia Mönchengladbach, three ahead of Shakhtar Donetsk and five clear of Inter Milan.

The madridistas came out in dominant fashion and confirmed they meant business in an assured first half, taking the lead after just six minutes. Ødegaard played a sumptuous through ball to Nacho, who was brought down in the box by Barella just as he was set to shoot. Hazard converted from the spot to make it 0-1. Zidane's charges continued their offensive and came close to adding to their lead on 13’, but Lucas Vázquez's long-rage effort came crashing back off the post.

Vidal given his marching orders
The chances were still flowing, Hazard trying his luck with 28 on the clock with a fierce shot from inside the box which forced Handanovic into a fine two-handed stop. With 33 minutes gone, Inter were reduced to ten men after Arturo Vidal was shown two yellow cards in quick succession for dissent.

Inter Milan were aware that the score made qualification an uphill struggle and pressed forward after the re-start. Zidane brought on Casemiro and Rodrygo for Ødegaard and Mariano on 59' and the change had an instant impact, with Rodrygo scoring with his first touch of the ball. A precise cross from Lucas Vázquez to the back post found the Brazilian whose volley deflected off Hakimi and past Handanovic into the net.

Madridistas in total control
The goal seemed to stun the hosts, who could do little to stop Real Madrid from spraying the ball around at ease in long spells of possession, as they created opportunities while the minutes slipped away from Inter. Lucas Vázquez had the chance to make it three, but his volley at the back post could only find the side netting. It took the hosts until the 82nd minute to register their first shot on goal, as Perišić's effort was well saved by the out-stretched Courtois. The Whites sealed a vital three points at the San Siro. 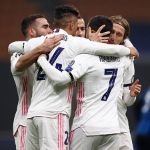