Real Madrid Women played well but came up against strong opposition who sealed victory in the second-half.
Real Madrid City

4
Real Madrid Women were unable to get off to a winning start in their first ever official match. Barcelona claimed victory in El Clásico of the Primera Iberdrola, after dominating possession from the start of the encounter at the Real Madrid City. The visitors created the first chance in the 13th minute, but Misa kept out Graham's powerful shot from inside the box.

Barcelona took the lead in the 18th minute when Patri scored from outside the area. After going a goal behind, Real Madrid applied the pressure and produced their best spell of the game. Kaci tested Paños in the 23rd minute and Asllani found the net in the 29th minute for David Aznar's side, but the goal was ruled out by the match official.
In the second-half, Barcelona sealed the victory in El Clásico with another three goals. The visitors went two goals to the good in the 55th minute thanks to an own goal. Martens scored the third in the 65th minute before Alexia netted a fourth. Real Madrid will now turn their attention to the next league match when the Whites will travel to Valencia next weekend. 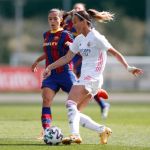