Goals from Ramos, from the spot, and Benzema sealed the win over Real Sociedad.
Estadio Anoeta

2
Real Madrid won in San Sebastián courtesy of goals from Sergio Ramos and Karim Benzema to pick up their third consecutive victory after the break due to coronavirus. A run of results that sees them move back to the top of the LaLiga table. There are eight finals left and Zidane's side now have their LaLiga title destiny in their own hands.

The madridistas created the first dangerous move after only two minutes. Valverde pulled the ball back and Vinicius Jr., under pressure, shot over from around the penalty spot. From that point until the half-hour mark, it was a tight affair with few chances. Shortly after that, the best chance of the first half came. Valverde won the ball back and started a counter-attack that ended with a Benzema shot that forced Remiro into action. The last chance before the break saw Vinicius Jr. leave two defenders behind, but his shot was turned away by the home goalkeeper.

The script at the start of the second period was rather different. In the 48th minute, Marcelo linked up with Vinicius Jr., who evaded the attentions of Llorente and then Gorosabel and, just as he was about to pull the trigger, he was upended inside the box. Sergio Ramos converted the spot-kick to make it 1-0 to the visitors and become the most prolific defender in LaLiga history in the process. The sour note came when he had to leave the field of play on 59' after taking a knock to his left knee, with Militão coming on in his place.

Benzema once again makes all the difference
Real Sociedad produced a reaction and drew themselves level through Januzaj on 69', but his effort was chalked off, following a VAR check, due to Merino being in an offside position. A minute later, the visitors extended their advantage. With his back to goal, Benzema brought Valverde's cross under control with his shoulder, before turning whilst holding off three defenders and finding a gap as he sent his shot past Remiro. This strike means that the Frenchman has now found the three times in his last two outings.

There were 20 minutes to go and Real Sociedad reduced the arrears through Merino's 83-minute strike to set up a thrilling finish. However, Real Madrid held on to their lead and managed not to afford the home side any further sights on goal. The madridistas leave San Sebastián top of the pile with eight cup finals to come. 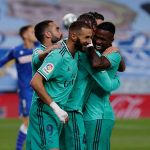