Real Madrid thrashed Galatasaray with three goals from the Brazilian, two from Benzema and another from Ramos.
Santiago Bernabéu

0
Real Madrid took a huge step closer to the Champions League last-16 after thrashing Galatasaray in a game that was decided early on. The Whites are now five points ahead of Club Brugge and six ahead of Galatasaray with two games to go. Galatasaray suffered in the opening minutes as the Whites went on the prowl. Before fifteen minutes were up, the Whites had netted three, with a clear protagonist in Rodrygo. The Brazilian scored a brace in just seven minutes and both were the fruits of his great link-up with countryman Marcelo.

The second captain crossed to the far post on 4’ and the recently capped international star of the canarinha did the rest. He cut inside of two defenders well before placing a perfect left-footed shot in the corner. The second was a tremendous header after yet another cross from Marcelo. This was a dream start for the Whites, but their ambition did not end there. On minute 13, after checking VAR, German referee Zwayer blew for a penalty after Kroos went down under an Nzonzi challenge right on the line. Ramos converted the penalty with a Panenka.

Real Madrid were already in pole position but wanted more and scored the fourth goal in the 45th minute. Rodrygo was alert and won back the ball on the edge of the area and played in Benzema, who made no mistake. The Frenchman, with 62 goals, is now the fourth top scorer in the history of the European Cup. The fifth goal almost came shortly after, but Muslera sent Hazard's shot behind for a corner after great individual skill. The only negative from the first half for the madridistas was Marcelo, who came off injured, replaced by Mendy.

Fourth consecutive match without conceding goal
Nothing changed after the break as Real Madrid delighted the Bernabeu and still had chances to add to the lead. Carvajal crossed with 50 minutes gone, Benzema brought it down on the move, but his shot went over. Kroos, from the edge of the area after 67', was the next to try his luck and his shot forced Muslera into a good save. Two minutes later, Muslera intervened again after a header from Isco, with his first touch of the game, from a corner.

Benzema's brace
The fifth goal seemed to be a matter of time and came in the 81st minute. Carvajal crossed and Benzema turned the ball into the net with the inside of the right foot. The Frenchman surpassed Di Stefano and is the third top scorer for Real Madrid in the European Cup (50). In added time Rodrygo completed his hat-trick, after a great combination with Benzema, he beat Muslera in a one-on-one, with a subtle finish, bring to an end a game that Real Madrid dominated from beginning to end. 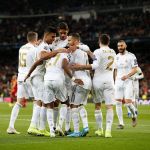