The madridista legend sat down with Realmadrid.com to reflect on 29 October 1994, when he made his competitive first-team debut at La Romareda.
On 29 October 1994, Zaragoza witnessed the beginning of the legend of one of the greatest players in Real Madrid's history as Raúl González Blanco made his debut at La Romareda. The forward went on to enjoy a 16-year stint with the madridistas, a spell which yielded three European Cup crowns, two Intercontinental Cups, a UEFA Super Cup, six LaLiga titles and four Spanish Super Cups. Raúl holds the club's appearance record (741 games) and lies second in the Whites' all-time scoring charts, with a tally of 323 goals.

On the 25th anniversary of his Real Madrid debut and posing at the Alfredo Di Stéfano alongside the shirt he wore on that day in Zaragoza, Raúl told Realmadrid.com about his debut and time at the club. The team's number 7 recalls 29 October 1994 in the following terms: "It was a one-off moment and it's the most special one because without it, I wouldn't have been able to go on and have the career that I dreamed of and which lasted so many years. All of the dreams I'd had about being a footballer came true on that day".

"A lot of memories come to mind about where I lived, I was very young, I was pretty much a kid, and the dreams that I had from a really young age came true as I pulled on that shirt on 29 October in Zaragoza. When I see that shirt, a lot of memories about things I experienced as a child come flooding back".

La Romareda
"Zaragoza… What a coincidence it was, it was there that I played my first and last game. In the first one I had a hatful of chances and didn't score and in my last appearance in a Real Madrid shirt, with an injured ankle and in the move just before I came off, I ran towards their goal, Cristiano passed me the ball and I managed to score what was my last goal and it was in that very same stadium. My first and last game in a Real Madrid shirt was in Zaragoza. I have a lot of affection for the city and La Romareda"."When you're 17 you don't even realise just what a big responsibility it is to play for Real Madrid. I was very young and playing football was what I loved doing. [Emilio] Butragueño was one of the players who helped me out the most. It was his last year in the team, I experienced his send-off, he had been an iconic figure, not only for Real Madrid but for the Spanish game as a whole. What I was focused on doing was trying to enjoy myself, trying to give my all every day and making the most of that moment because I didn't know how long it would last. Over time, I managed to begin my second season, my third one…"

Number 7
"In my first season, I wore the number 17 shirt, when the shirts had the players' names and numbers on the back. During [Fabio] Capello's time in charge, he took over in 1996, I already wore the number 7 and it was a bit of a responsibility because that shirt had been worn by Madrid legends whose names are etched into the memory of all madridistas. It was always a constant responsibility, not only to wear the number 7 shirt but to wear the Real Madrid crest".

Raúl and goals go hand-in-hand
"Fortunately, I scored a lot of goals, but I always remember my first one, just like I remember the shirt from 29 October, from my debut in Zaragoza. What really excited me was to be able to run out at the Bernabéu and score my first goal, which, what's more, came against Atlético Madrid in a derby. It was marvellous and incredible and came following a Laudrup pass. I'm able to remember it time and time again, as if I was watching it live right now. And then there's the goal in the Intercontinental Cup and the ones I scored in the Champions League finals. I'm sure that many of them, in one way or another, helped the team to three points, or towards a LaLiga title or to edged us towards the Champions League crown. Fortunately I managed to score a lot of goals, but the most important thing is the journey and the fact that I really enjoyed myself throughout my career. “Records are there to be broken. I'm sure that someone will come along and break the appearance record. I feel really pleased and proud about the many seasons that I spent at the club, the games I played, the trophies I won… I could likely have done more and we could have achieved more, but I enjoyed myself and, above all, I always tried to give my all. I always tried to help my teammates, the coaches and the club and make the fans happy with every Real Madrid match they watched and that's the most important thing for me. I grew up at this club, I joined when I was 15 and as well as in professional terms, Real Madrid have given me it all on a personal level. The club has given my family and my parents everything, I then went on to have a family and my children live out every Madrid game with real passion. It's a mutual feeling in terms of what the club feels for Raúl, and what Raúl feels for the club". 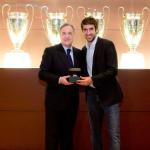