2
Real Madrid Castilla were unable to continue their fine form at the Alfredo Di Stéfano, where they had won their previous two games and remained unbeaten until today. The academy side fell to a 1-2 defeat to Racing de Ferrol despite having plenty of chances to clinch a different result. Marvin put the Whites ahead but Juan Antonio, from the spot, and Fer Beltrán handed victory to the Galician side.

Raúl's men knew they were in for a hard-fought clash and it ended up being a very scrappy affair. The Whites were patient in possession, before Javi Hernández sent off an early warning shot with a decent free-kick. The defender's strike was turned on to the crossbar by goalkeeper Diego Rivas.

That was the warm-up for the first goal of the game. With 24 minutes gone, Marvin stole the ball from a visiting defender and slotted home when one-on-one with the goalkeeper. The youth team's joy was short-lived, and on 32’, Juan Antonio converted a penalty given away by Ayoub following a corner. On the stroke of half-time, Fer Beltrán put the Galician side ahead when he pounced on a loose ball in the box.

Camped around the opposition box
After the restart, Castilla went all out to find the leveller. Raúl brought on Fidalgo and Feuillassier on 53’ in an attempt to gain some craft in the final third. The academy side were pouring forward and had chances to equalise through Feuillassier, who failed to hit the target with three successive opportunities. The visitors were always a threat on the counter-attack, Marvin also failed to turn home after a superb cross from the right flank and Castilla ultimately fell to a defeat which was a harsh reflection on the nature of the game. Racing de Ferrol finished the game with ten men after Dani Ábalo was sent off in injury time. 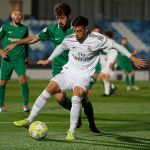