Sergio Ramos and Casemiro struck following Bonaventure's double in a contest in which the Whites had the chances to have secured victory.
Santiago Bernabéu

2
Real Madrid claimed a draw against Brugge in their first home outing of the 2019/20 Champions League campaign. The Whites, who bossed proceedings and carved out numerous chances, very nearly completed a winning comeback but failed to find a winner. Emmanuel Bonaventure netted twice before the break, whilst Sergio Ramos and Casemiro were on target to level matters in a fine second-half showing from the madridistas which ultimately wasn't enough to take maximum points.

The game's script was established right from the get-go. Madrid dominated possession whilst Brugge played deep and left their attacking trio isolated up top. The hosts fired in a warning shot with a Karim Benzema header, but Bonaventure finished off a counter-attack to hand the Belgians a ninth-minute lead. The referee awarded the goal after consulting the VAR system. Real Madrid would have to come from behind and the home side wasted no time in laying siege to Simon Mignolet's goal. The chances came thick and fast and the closest Madrid came to levelling was through Kroos, who tried his luck from range, before the visitors' goalkeeper denied Varane's headed effort. However, Brugge continued to pose a threat on the counter and Thibaut Courtois clawed out a Tau effort in the 34th minute.

Goal from Ramos
After Kroos had tried his luck from far out, it was Brugge who got the second goal of the game. Bonaventure stole the ball from Modric and he sped off and finished neatly against a helpless Courtois (39’). The game had really begun to turn against the Whites, but the second half was still to come. Areola and Marcelo came on for Courtois and Nacho and Zinedine Zidane’s side came out swinging this time round. Eden Hazard, Casemiro, Benzema… Real Madrid were relentless as they searched for a goal. Soon enough, they found it through Ramos, who thumped a header in on 55’. After a VAR check, the goal was given and it was now 2-1 to the visitors. The Whites, and the Bernabéu faithful, had a lifeline to cling to.

Casemiro pulls it level
Zidane used his last sub as Vinicius Jr entered the fray. With 20 minutes to go, Real Madrid tried their best. Modric smashed a shot that flew over the bar. Vinicius was on fine form, creating danger down the right. All that was missing was the final product. The equaliser came from a free-kick. The foul that led to the set piece also saw Brugge captain Vormer get a second yellow. Kroos struck the ball and Casemiro was able to make it 2-2 with a header (85’). Time was now against Real Madrid but they did their best to test the Belgian side, pressing well around their box. Ramos and Varane both tried to connect with the flurry of crosses that sailed into the box. Neither could make it 3-2 as the referee blew the final whistle and it ended honours even. 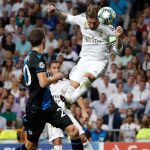