Hazard and Modric both scored great goals, joining Benzema and James to seal a win over Granada at the Bernabéu.
Estadio Santiago Bernabéu

2
Leaders going into the international break thanks to some great goals. Real Madrid came out on top in the battle between the top two in LaLiga to remain top of the pile. Benzema opened the scoring thanks to a great assist from Bale. Hazard opened his account with a spectacular chipped shot, and Modric fired in the third from outside the box. James rounded off some great collective play in added time to kill the game. Granada pegged it back to 3-2, but they could not prevent a madridista win, as the Whites remain unbeaten in LaLiga.

Real Madrid managed to turn a great start into an early goal. With barely two minutes on the clock, Bale laid on a sensational assist with the outside of his foot for Benzema to get his sixth goal of the campaign. The Whites were dominating every facet of play and around the 15-minute mark there was a chance for Carvajal to make it two but Rui Silva stopped his attempt and Benzema's follow-up shot went wide of the upright.

As the minutes ticked by Granada were failing to pose any sort of threat on Areola's goal, with Zinedine Zidane's charges the ones pouring forward in search of a second of the afternoon. Fede Valverde had a presentable headed chance, whilst Dani Carvajal came close with an effort from inside the box that Rui Silva was equal. In the 34th minute, Toni Kroos, who was carrying a knock, was replaced by Luka Modric. After Antonio Puertas tried his luck from the edge of the area and Gareth Bale hit the turf inside the box only to see the referee fail to point to the spot, came the sweetest of strikes from Hazard in the 46th minute. Valverde overpowered the Granada backline and laid the ball off to the Belgian, who sent a sumptuous chipped effort past the powerless Granada goalkeeper.

Modric belter
The second half began with a shot from range from Herrera which was gathered in by Areola. The Andalusians came out after the restart intent on playing higher up the pitch. After a stop-start period featuring several interruptions and in which there was a distinct lack of flow to proceedings, Modric popped up in the 61st minute to put Madrid three goals to the good. The Croatian was picked out by Hazard and he smashed the ball into the top corner. Eight minutes later, Granada found a route back into the game after Areola upended Carlos Fernández and Darwin Machís converted the resulting penalty.

James on target
The contest continued to be an end-to-end affair. A Ramos header on 74' nearly brought Madrid's fourth of the game. Granada hit back with a chance from a set piece that Raphael Varane was on hand to keep out. This was a sign of things to come as the visitors then made it 3-2, when Duarte stabbed home after Víctor Díaz flicked on a 78th-minute flag kick. Despite holding a narrow lead, Real Madrid saw out the final stages with relative ease. Benzema came close in the 86th minute, before James rounded off a 4-2 win following a sublime counter-attacking move in injury time. 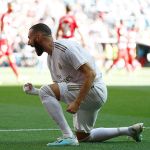