Real Madrid are the best-represented club in the 2019 Best XI announced during the The Best Awards gala.
Sergio Ramos, Marcelo, Luka Modric and Eden Hazard have been named in the FIFA FIFPro World11 2019. Real Madrid are the best represented club in the line-up, which was announced during the The Best FIFA Awards gala. Club president Florentino Pérez headed up the Real Madrid delegation at the ceremony held in Milan's La Scala.

Marcelo makes the team for the sixth time, after having been included in 2012, 2015, 2016, 2017 and 2018. Modric, meanwhile, as been recognised in each of the past five editions, whilst Hazard again features after having made the line-up for the first time last season.The full FIFA FIFPro World11 2019 line-up is as follows: Alisson, De Ligt, Van Dijk, Ramos, Marcelo, De Jong, Modric, Hazard, Ronaldo, Messi and Mbappé. 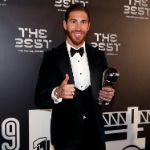