Benzema, Kroos and Lucas Vázquez gave the Whites the win, despite being a man down for half an hour.
Estadio de Balaídos

3
Real Madrid lead the league standings after the first round of fixtures following victory over Celta at Balaídos. Benzema capped off a great piece of play from Bale, Kroos netted a spectacular long range goal, and Lucas Vázquez gave the Whites the win after they had to struggle with the loss of Modric who was sent off on 57’. The first blow took only ten minutes. Bale got the ball in a tight position, played it off well with Vázquez and then rounded off the move by setting up Benzema, who slotted home in the six-yard box. One minute later the Welshman was the key man yet again. This time however, his shot was blocked by Rubén Blanco.

The hosts reacted well as they searched for a draw. They came close around the half hour mark. Aspas crossed in and Varane did just enough to stop G. Fernández getting a shot off. Real Madrid then tried their best, only to be held off by Rubén Blanco again. Modric showed great skill around the edge of the box before blasting a shot in, only for the Galician shot-stopper to prove his mettle once more. On 44’, Benzema got in between the lines well, before Bale tried his luck only to be seen off by the Celta keeper yet again. In added time, Estrada Fernández, in charge of VAR today, ruled out a Brais Méndez goal due to Aspas being offside in the build-up.

The second half of the game started in the same way and on the first play Benzema nearly scored again. Vinicius Jr. saw Marcelo make a run behind the defence and crossed it over to him before the Frenchman tried his luck. His effort went wide of the goal by centimetres. This play only spurred the hosts on more, as they began to create real danger with Aspas moving through the lines. The Spanish international was held off well by Courtois in one-on-one on 48 ’and two minutes later the chest of Casemiro stopped an equaliser going in as Brais Méndez ricocheted a shot off him in the six-yard box.

Beautiful work from Kroos
Things got harder after a straight red card for Modric for his foul on Denis on 57 ’. Real Madrid had to go more than half an hour with one player less than the hosts and on the next play Courtois was forced to make another great stop, this time keeping out Araujo's header. The visitors had to suffer make sure they got the win, but Kroos was able to make the difference on 61’. The German got the ball on the edge of the box and launched a missile into the back of the net. The ball smashed in off the crossbar, making it all the sweeter for the fans who watched on.

Lucas Vázquez kills the game
The goal really affected Celta and Zidane decided to change things by bringing on Lucas Vázquez and Isco for Vinicius Jr. and Bale, respectively. The Galician star was the one to kill the game on 80’. Benzema got the ball outside the box and fed the Spaniard who finished neatly to round off the madridistas league opener. In extra time, Iker Losada showed his promise, cutting the distance for the hosts with a consolation goal. 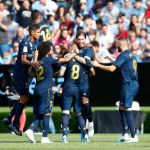