The Real Madrid player averaged 17.3 points, 6.8 rebounds, 4.8 assists and 23.3 PIR in the final phase.
Mario Nakic was named as the best player in the final phase of the Euroleague with averages of 17.3 points, 6.8 rebounds, 4.8 assists, 1.5 steals and 23.3 PIR in 23:38 minutes of game in the four games played. The Madrid player led the Junior to their second Euroleague and finished the tournament with an exceptional performance in the final against the Mega Bemax Belgrade with 41 points.

The forward follows in the footsteps of Luka Doncic, who won it in 2015 in Madrid. Nakic got 12 points and 10 PIR against Valencia Basket, 13 and 27 against Rytas Vilnius, 11 and 15 against Crvena Zvezda and 33 and 41 in the final. In addition, he was included in the best quintet of the final phase with his teammate Usman Garuba. 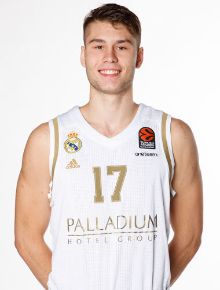