Two goals in the second half decided the last game of the season.
Santiago Bernabéu

2
Real Madrid rounded off the season against Betis at the Bernabéu. The Whites were unable to beat a rival who took their chances well in a hard-fought game. The first half ended goalless, although both sides had moments where they could have gone ahead. Marcelo tried his luck on 24’, but his shot from the edge of the box flew just wide.

Betis responded well just four minutes later, with Bartra forcing Keylor Navas to make a save. Despite that, the clearest chance of the opening 45 minutes fell to Benzema. Francis made a mistake and played the French star on, but he could only hit the post from around the penalty spot on 34’. A minute later, Keylor Navas reacted brilliantly to keep out a Lo Celso chipped shot to send the ball out for a corner.

Great play from Vinicius Jr.
The match continued along the same line after the break with both sides looking to break the deadlock and Vinicius Jr. came close to doing so in the 57th minute. The Brazilian showed great individual skill inside the area to get past Mandi with two feints, but Pau Lopez came out on top in the one-on-one. Four minutes later, Loren put Betis ahead on a counterattack.

Zidane’s side looked for the comeback, but after some nice build up play the visitors got the second goal. Junior pulled the ball back and Jesé finished first time with 75 on the clock to seal the win for Betis in the last match of the season. 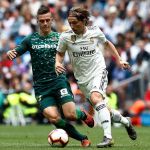