Benzema, who has been on target five times in his last four appearances, struck Madrid's goal against Leganés.
Butarque

1
Real Madrid tonight claimed a draw from their trip to  Leganés. The Whites enjoyed the lion's share of possession and the best of the chances to have scored more than a solitary goal they did, but ultimately failed to take all three points at Butarque. Benzema, whose purple patch continued here and he's now netted all five of team's last five goals for Zinedine Zidane's men, slotted home for the madridistas after the break to cancel out Silva's goal, which had come on the stroke of half-time.

Madrid bossed possession right from the off and came close to opening the deadlock in the eighth minute, when some fine link-up play between Isco and Asensio culminated in the Majorca-born attacker firing in an effort that was kept out by Cuéllar. Meanwhile, the well-organised hosts looked for the opportunity to hit Madrid on the break, with their biggest threat coming from headed chances. In the 15th minute, a Braithwaite header whistled narrowly wide. The minutes ticked by as Zidane's men continued to dominate whilst lacking any real cutting edge. As half-time approached, the Whites began to make greater inroads into the hosts' box and came close with an Isco free-kick, an Asensio shot and a Varane effort that was chalked off. However, Leganés it was who got their noses in front, when Silva's strike from the edge of the box tucked just inside the corner of the net in the 45th minute.

It was time to mount a comeback and the equaliser came with the first chance of the second half. A sensational piece of control and an assist from Modric saw him play Benzema in. The Frenchman's initial shot was kept out by Cuéllar, but the Whites' striker was first to the rebound and made sure at the second time of asking (51'). Real Madrid continued to control the game and dictate the attacking play. Modric was pulling the strings but Leganés made changes as they looked to cause problems for the Whites at the back.

Asensio twice had the chance to put Real Madrid in front. In the 68th minute, an acrobatic effort was kept out by Cuéllar and, five minutes later, he found himself one-on-one with the goalkeeper, who came out on top on this occasion. A quarter of an hour was still to play and the game was wide open. En-Nesyri beat Navas in the 83rd minute, but his goal was disallowed for offside. At the other end, Marcelo had a powerful shot kept out by an in-form Cuellar. The two teams pushed for the winning goal until the end, but the match ended all square. 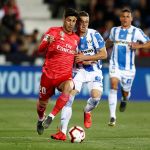