Real Madrid took all three points against Celta on the French coach's return to the dugout.
Santiago Bernabéu

0
The positive vibes surrounding last Monday's news of Zidane's return to the club have been immediately translated on to the pitch. Real Madrid overcame Celta with a 2-0 win in a game they dominated throughout and which they could have won by more. Goals for Isco and Bale made sure of the three points to mark the start of the second spell for the coach who has won the last three Champions Leagues.

Madrid flew out the blocks and took the game to their opposition from minute one. With just 5 on the clock, Sergio Ramos had an early chance from a corner, while the Whites took charge of the ball and set up camp on the edge of the opposing area. The left-hand side was providing much of the team's attacking threat, as Bale and Marcelo linked up to great effect. Celta did gradually begin to work themselves into the game and on 16’ Maxi Gómez forced Keylor Navas into a super stop. The chance sent the confidence flowing through the Galician side, who were now matching Zidane's team stride for stride.

Bale strikes the bar
The final fifteen minutes of the half, though, was all about the madridistas. With Celta looking well-drilled at the back, Kroos tried his luck from range and saw his effort skim just over the bar. On 31’, Bale smashed the bar from inside the area as the Whites upped their intensity in search of the first goal, before a superb Marcelo effort was kept out by Rubén Blanco. Ramos came close from the resulting corner but his effort flew just wide. Despite the chances and Bale's insistence down the wing, the scores were level at the break.

After the restart Real Madrid continued to control proceedings but now they stepped it up a level. Marcelo and Odriozola were pushing forward in support of the attacks but the Whites lacked the killer touch. Benzema came close with 54 on the clock but Rubén Blanco kept him out. On 58', Modric scored from the edge of the area but the referee ruled it out after consulting VAR, believing Varane, who was offside, had interfered with play. We were forced to wait until the 62nd minute for the opening goal. It came when Asensio cut through the Vigo defence, before Benzema set up Isco to turn home from inside the six-yard-box. It was the Malaga-born midfielder’s last contribution before being replaced by Ceballos.

Decisive goal
The Whites continued to attack and in the next five minutes, Bale, Asensio and Benzema all came close, but the Celta goalkeeper stood strong. The reward for their hard work came in the 77th minute, when Bale controlled a pass from Marcelo and made it 2-0, smashing his shot in off the post. Real Madrid were still pushing forward and creating chances, with Asensio coming close once again, but the score line remained the same as Zidane's Madrid start back up with a win. 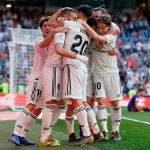