Real Madrid slipped to defeat against Ajax, bringing an end to the defence of a crown secured in each of the past three years.
Santiago Bernabéu

4
The winners of the last three editions of the Champions League won't have the opportunity to defend their crown this season as Real Madrid fell to a 4-1 home defeat at the hands of Ajax at the Santiago Bernabéu, a result which means they fail to progress to the quarter-finals. The Whites had a hatful of chances, and were twice denied by the woodwork, but Marco Asensio's opening was the only one the hosts managed to convert. The Dutch outfit, meanwhile, were providing a great attacking threat, led by an on-song Tadic. The Serbian midfielder claimed two assists and found the net with an effort approved by the VAR sytem after a move in which there were calls that the ball had gone out of play.

Madrid bossed proceedings in the opening stages as they looked to make inroads into the visitors' area. With just four minutes on the clock, Varane came the width of the crossbar away from making the breakthrough when he rose highest to meet Lucas's centre. However, Ajax hit the front with their first forward foray of the night. Tadic regained possession in a dangerous area and he teed Ziyech up to sidefoot past Courtois in the seventh minute. After falling behind, the Whites continued to probe. In the 10th minute, a Vinicius Jr. effort called Onana into action. The Dutch side were leaving spaces to exploit at the back but continued to pose a threat every time they approached the Madrid goal.

Chances
Immediately after another Varane effort was kept out by the visitors' goalkeeper, Ajax doubled their advantage. Tadic earned himself some space with a silky double drag-back, before picking out Neres, who tucked the ball home in the 18th minute. The visitors dominated the ensuing minutes and could have further extended their lead through shots from Neres and Tadic. The Madrid riposte came from Lucas, whose effort from inside the box was parried away by Onana. In addition to lacking that cutting edge in front of goal, lady luck did not shine on Real Madrid as the injuries kept coming, with Lucas Vázquez and Vinicius Jr. giving way to Bale and Asensio. The game did remain wide open though, as Courtois fended off a Ziyech effort on 36’ and at the other end, it was Bale who made a strident run, only to smash a shot against the upright on 42’.

The Whites needed to launch a comeback, and looked vexed as they took to the pitch for the second half. In the first four minutes, Asensio and Benzema led the charge, both trying their luck. Ajax continued their counter-attacking play, however. Courtois made another save against Van de Beek on 51’. Eight minutes later, Benzema capped off some stellar individual work with a strike that just went wide. On 62’, Ajax put together some sensational transitional play to make it 3-0 through Tadic. The referee consulted VAR after it seemed the ball had gone out of play, but on further reflection, ruled that the goal should stand.

Asensio strikes
Real Madrid refused to give up. Bale and Asensio had two consecutive chances. This was a foretaste of the goal to come from the Majorca-born star, he made it 3-1 with a shot that found the far corner (70’). The chances of a truly historic comeback were extinguished just minutes later, as Schöne scored a direct free-kick to make it four for the Dutch side. There was still time on the clock, but the deficit was too big. Nacho saw red in the dying moments of the game. The European Champions will not be defending their title this season. 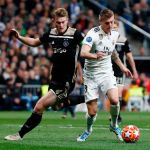