Real Madrid record their fifth consecutive league away win in Valladolid with two goals from the Frenchman and goals from Varane and Modric.
José Zorilla

4
Real Madrid won their fifth consecutive away game in LaLiga at the José Zorrilla stadium. The Whites were up against it in the first half, with Valladolid taking the lead, but they came back thanks to goals from Varane, Benzema (2) and Modric to pick up three important points.

They had to get down to work from the off as Valladolid came out with all guns blazing and won a penalty after 12 minutes when Odriozola brought down Óscar Plano. Alcaraz skied the spot kick. The midfielder was in the thick of it again just a minute later, after great individual play he threaded a pass to Keko and the cross was turned in by Guardiola, although VAR disallowed it for offside.

Reaction
Valladolid pushed on and VAR again intervened, another goal for Guardiola and another off side after 18'. The first legal goal came on the half-hour mark. Keko crossed and Guardiola assisted Anuar, who added the finishing touch. The response from Real Madrid came four minutes later. Kroos took the corner, Casemiro headed in, Masip failed to clear and Varane turned the ball home. The Whites could have gone in at the break with a lead but the long-distance shot from Casemiro after 45' was kept out by Masip.

The second half kicked off with a double scare. First, Antoñito crossed on 47’ and the ball flashed across the goal line but nobody was on hand to turn it home. Two minutes later and Anuar went through one-on-one with Courtois but was unable to beat the shot-stopper. Real Madrid, however, were far more clinical, going ahead shortly after with their first opportunity since the restart. Odriozola was clearly upended by Óscar Plano in the box and Benzema made sure from the resulting penalty, sending Masip the wrong way. The Whites have proved infallible from the spot, converting every penalty they’ve been awarded so far this season.

Benzema double
The goal spurred the madridistas on and they began to dominate the clash, coming close to adding to their advantage. A sublime Asensio pass in behind on 57’ found Ceballos, whose volley was pushed behind by Masip. Just two minutes on and the goal did come, when Kroos whipped in a corner and Benzema rose to meet it with a thundering header which left the hosts’ goalkeeper with no chance.

The minutes ticked by and Valladolid warned once again that they weren’t out of the clash yet as Verde took a corner which was volleyed on to the post by Guardiola with 77 on the clock. Three minutes later, Casemiro was given his marching orders with a second yellow card. The Whites would have to play the final ten minutes a man down but that wasn’t enough to stop them increasing their advantage on 85’ after a beautiful effort by Modric to round off the thrashing and pick up three crucial points at the José Zorrilla. 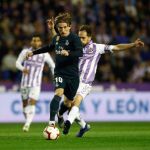