Goals from Benzema, Vinicius Jr. and Mariano give the victory to Madrid against Alavés ahead of the cup Clásico.
Santiago Bernabéu

0
Real Madrid picked up maximum points as they continue to make up ground at the top. The Whites showed again that they are in fine form with their fifth consecutive win against Alavés. It was Benzema who led the way, making it four games in a row on the scoresheet, getting 6 goals in that run.

The world champions dominated from the start with the first chance coming after just three minutes. Ceballos shot from inside the area after a rebound and Maripán stuck out a leg to send the ball behind for a corner. Another chance came six minutes later. Benzema's good individual work after combining with Ceballos ended with a shot from the edge of the area.

Benzema goal
As the minutes passed, more Real Madrid chances came. Vinicius Jr. tried his luck this time but Pacheco cleared with his fists with 16 minutes gone. The reward came on the half-hour mark. Vinicius Jr. threaded the ball through to Reguilón who squared it for Benzema who was on hand to finish. The Whites took the goal advantage in to the break.

Alavés pushed higher up the pitch after the break, but the real danger still came from the home side. Bale took the ball well with his back to goal on 49’ and played in Benzema, who rifled a shot into the hands of Pacheco. The visiting team’s goalkeeper made another big save moments later. A full-stretch save kept out Bale’s strike, a fierce shot across the face of goal just a minute later.

Vinicius Jr. gets the decider
Solari sent on Asensio for Bale on 63’ and then two minutes later Jony had the chance to score, but Courtois made a stellar save. On 80’ it was Vinicius Jr. who got the decisive goal. Asensio swung in a right footed cross which no defender could get to. The Brazilian star was at the far post where he brought the ball down and fired past Pacheco. Mariano finished off a fine performance at the death heading home the third. That makes it five consecutive wins before the Whites turn their attentions to el Clásico in the Copa del Rey. 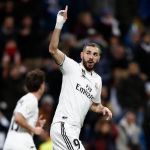