Casemiro's bicycle-kick and goals for Ramos and Bale were enough for the Whites who move into second place in LaLiga.
Wanda Metropolitano

3
Focus, solidity and force. As the business end of the season rolls around, the European champions continue to show the excellent level they’ve reached over the last few weeks. The Whites won 1-3 in an intense derby at the Wanda Metropolitano, where no other visiting team had won thus far this term. The Whites now sit second in LaLiga. Casemiro opened the scoring in acrobatic style, then Ramos netted a penalty before Bale finished off the team’s fifth league win in a row.

The two sides were intense from the off, battling for every ball. Griezmann fired in a shot, and Modric sent in a header, as the two attacking stars troubled Courtois and Oblak early on. Real Madrid tried to go ahead but Atlético pressed high up in search of a dead ball situation. The first goal came shortly after. On 16’, Kroos sent in a corner, Ramos wrestled to get control of the ball, and set up Casemiro, who smashed in an overhead kick to put Solari’s side ahead.

VAR plays a role
At 0-1, the Whites looked to dominate even further. Just nine minute later it was Atlético who levelled the game. Correa took the ball off Vinicius in some contentious play, the madridistas called for a foul as Griezmann shook off his marker to beat Courtois. The assistant referee claimed the French star was offside, but VAR proved otherwise and the goal stood.


The constant interruptions made it difficult for the madridistas to enjoy any continuity in their play. Chances were now at a premium, though Kroos did test Oblak on 37’ with a long-range effort. As it looked like half-time would come around with the scores level, a sublime run by Vinicius on the left-hand side forced Giménez into conceding a penalty, which was confirmed by VAR. Ramos stepped up to make it 1-2 from the spot and net his eleventh goal of the campaign.

The early chances following the restart all fell to the rojiblancos. Morata and Griezmann both looked to bring things level once again with similar efforts on goal. The Spanish forward then had an effort ruled out on 54 minutes for offside, while Solari brought off Vinicius and sent Bale on in his place. With 60 minutes gone, Courtois needed a strong hand to keep out Giménez and shortly after Morata appealed for a penalty but the referee saw no infraction and his judgement was backed by VAR.

100 goals for Bale
The game continued in a stop-start fashion, with too many fouls and few chances. Then, out of nowhere, the madridistas’ quality came to the fore with a rapid transition up top which left Bale in a shooting position after he was found by Modric’s superbly-weighted pass. The Welshman struck across goal to make it 1-3 and bring up his 100th Real Madrid goal. Atlético were then reduced to ten men with 80 minutes gone as Thomas received a second yellow card. The game was as good as over, though Bale had the chance to increase the deficit when he headed just over, but it finished 1-3 as Real Madrid continue their fine run. Next up, the Champions League. 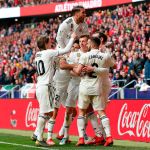