Casemiro put Real Madrid ahead in the first half but the Catalan side came back strong in the second.
Santiago Bernabéu

2
Real Madrid have fallen to defeat at the Bernabéu against Girona. The Whites were the better side in the first half as they went ahead through Casemiro, before coming unstuck in the second period. The game's first chance arrived inside 17 minutes when Kroos won the ball back and fed Lucas Vázquez, who took a wonderful touch to sprint past two opposition defenders and put himself one-on-one against Bono but the visiting goalkeeper did well to deny him. Two minutes later, Girona responded but Courtois was more than equal to Stuani's effort from the edge of the box.

As the game wore on, Real Madrid increased their pressure on Bono's goal and about halfway through the first half, they duly took the lead. Kroos whipped in a sublime cross and Casemiro rose to head it powerfully into the back of the net. It was the Brazilian's second goal in his last two games. There was still time for both sides to fashion a chance before the break. The first fell to Girona, but Granell's powerful drive on 40’ flew inches wide. Lastly, Benzema unleashed an effort from inside the area just two minutes later but Bono showed fantastic reflexes to keep him out.

Girona pushed higher up after the break as Lozano and Aleix García were thrown on. The duo proved key on 59’ as Portu crossed in and Courtois was reliable as ever, batting away Lozano’s header. The ball fell to Aleix García, who fired in a shot from close to the penalty spot. This was a taste of what was to come as six minutes later the visitors got an equaliser thanks to Stuani who netted penalty that was given away by Sergio Ramos.

Girona fight back
There were still 20 minutes to play, and Girona seized on their opportunities, making it 1-2 on 75’. Portu, who had previously hit the post, was on hand to bury a header from inside the six-yard box. Real Madrid tried in vain until the final whistle as Vinicius Jr. had chances around the edge of the box and Bale had a one-on-one chance but was well off-balance. On 90’ Ramos was sent off for a second yellow and Courtois, who came up for the final corner, tried his best to head the ball in, but his effort flew just wide. 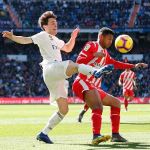