Lucas Vázquez scored Real Madrid's goal and they will play for a place in the final at home on the 27th of February.
Camp Nou

1
Real Madrid and Barcelona have left the tie wide open ahead of the second leg, though the Whites enjoy a slight advantage given their away goal. The Bernabéu will play host to the decider on the 27th of the month, following a game which saw the madridistas fly out the blocks. Pressing high up and surprising the hosts, they stole the ball back time and again in opposition territory and transitioned to threatening situations, the first of which resulted in a Kroos shot from the edge of the box but Ter Stegen punched it clear after 5 minutes.

Following another quick dispossession high up just one minute later, the madridistas got the goal which would take them into the break on top. Vinicius Jr. sent a cross to the back post where Benzema was waiting. The Frenchman got in behind Jordi Alba, took the ball down and pulled the ball back into the middle, for the onrushing Lucas Vázquez to stroke home first-time with his left foot. The visitors were enjoying a fantastic early spell, controlling the ball and looking comfortable at the back, until more or less the half-hour mark.

Fine stop by Keylor Navas
From that point, perhaps due to the physical demands of Real Madrid's superb early pressing taking their toll, the hosts began to dominate possession and create danger, particularly from set-pieces. Malcom sent in a free-kick on 32’ and Rakitic's bullet header came back off Keylor Navas' bar. Three minutes later, Luis Suárez struck a fine effort from the edge of the area but he was denied by a wonderful diving save from the madridista keeper.


Barcelona pushed on in search of the equaliser and managed to find a way to it in the 58th minute. Keylor Navas was faster than Jordi Alba on to a long ball and Luis Suarez hit the post on the rebound. The ball fell to Malcom, who put the ball into the back of the net. Real Madrid tried to push on and force the game, with Solari bringing on Casemiro and Bale after 64 minutes for Llorente, who went off injured, and Vinicius Jr.

Chances
It became an end-to-end encounter but there weren’t many clear chances, until the Whites had a go on 81 minutes. Ter Stegen parried the initial effort and the ball fell at the feet of Benzema, who set up Bale but the Welshman missed the target from the follow up. Four minutes later, Kroos put in a free kick and the header from Casemiro was just off target. The semi-final will be decided at the Bernabéu. 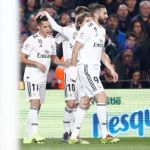