The Whites dominated for large stretches but did not take advantage of their chances to score.
Santiago Bernabéu

3
Real Madrid will not be in the final of the Copa del Rey. The Whites were undone by Barcelona and a game where they dominated for large stretches and there were plenty of chances to score. That lack of killer instinct was to be the downfall of Solari's side. The Bernabéu faithful were spectacular, and the home side were led by a lively Vinicius. The Brazilian created danger every time he touched the ball. On minute 14 he went down in the box following a Semedo challenge but the referee ruled no penalty.

Little by little, the Whites started to turn the screw, stringing together their chances. Vinicius was at the heart of all the positive movement.  First, he fired over from inside the box and then tested Ter Stegen will a powerful shot. Barcelona looked to play out from the back and pressured Navas when Dembélé latched onto the ball. Just when Barcelona were edging closer to the Whites' box, Solari's team had a couple of good chances. On 36’, Casemiro robbed the ball and set up Vinicius in a shooting position, but Lenglet was able to clear the danger and Benzema couldn't beat Ter Stegen at the second time of asking. On 38’, Vinicius fires another chance high after Reguilón sent in a cross. It had been a good first half from the madridistas, but there was no goal to be found.

Chances
The second half started along the same line. Real Madrid kept searching for the goal but it was Barcelona who got the first goal with their first shot on target. Dembélé pulled the ball back to Suarez who opened the scoring (50'). The goal spurred the Whites on and they continued to create chances. Kroos tried his luck from the edge of the area and Casemiro had a headed chance from a free kick.

With half an hour to play Madrid were in the ascendency. Reguilón, tireless on the left, put a dangerous cross in but Lucas just missed. Barcelona were threatening on the counter attack and in the 63rd minute great play from Vinicius ended in a header from Reguilón that was kept out by Ter Stegen at full stretch. A shot from Carvajal was caught by the goalkeeper and another chance from Vinicius after beating Pique and Semedo almost levelled things up before the killer blow came for Barcelona. Dembélé crossed from the right and Varane, trying to clear, turned it in to his own goal (69'). Four minutes later, Casemiro gave away a penalty on Suarez and the Uruguayan made it 3-0. All in all, an unfair result for Real Madrid. 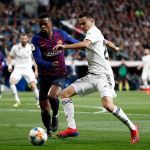