“A new player has arrived who has that special talent and those values ​​that can make him very important to this team”, said Florentino Pérez.
Discurso íntegro de Florentino Pérez en la presentación de Brahim Díaz
Brahim Díaz was introduced as a new Real Madrid player in the presidential box at the Santiago Bernabéu. The midfielder, who will wear number 21, is linked to the club until June 30, 2025. After showing a video with some of the best images of the player, President Florentino Pérez spoke: "We welcome our new player Brahim Díaz, a player with quality, magic and a huge personality who dreams of being a successful footballer wearing this shirt and this badge".

"Real Madrid have won the Champions League and Club World Cup double for the third time in a row and for the fourth time in the last five years. I always say that all madridistas must value this period of success".

Excite the Real Madrid fans
"We will continue to build a Real Madrid ready to thrill Real Madrid fan in the present and in the future. That's why today I want to show my enormous satisfaction with the arrival of a player who has that special talent and those values ​​that can make him very important to this team".

"Dear Brahim, you have chosen this badge over all those great clubs that wanted to sign you. You arrive at the most demanding club in the world. You have an immense challenge before you but you have already been able to prove your level. The fans here are going to give you everything so that you feel the pride of belonging to the greatest footballing legend".

"I understand that defending this badge means putting on the jersey that has the ambition to always win and the responsibility of leaving your soul on the pitch for the biggest club in the world. I promise to give 100% from the first day and I want to thank the trust placed in me. Thanks to my family, I will try to make them proud of me in this stage of my career. Thanks to everyone and hala Madrid!".

Signing the contract
Before posing in the presidential box, Brahim Díaz signed his new contract in the Board Room at the stadium accompanied by Florentino Pérez. After the signing, the midfielder received a watch, a replica of the Santiago Bernabéu and a jersey with his name and the number 21. 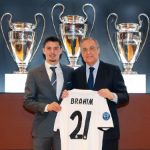