2
Real Madrid returned to action with a draw against Villarreal (2-2) on LaLiga match day 17, in a game moved to accommodate the Whites' Club World Cup participation in Abu Dhabi. The Estadio de la Cerámica played host to a gripping, hard-fought encounter to kick off 2019, which saw Benzema and Varane both score with their heads to cancel out Cazorla's early strike, but the diminutive midfielder popped up again on 82’ to square things up.

The game started at a frenetic pace and it didn't take long for the goals to start flowing. Villarreal struck first. Barely two minutes had passed when Chukwueze forced Courtois into a fine save. It was a warning shot, with Carzorla making it 1-0 inside 4 minutes when he profited from another fine move by the Nigerian to smash home across goal. But the Madrid response was rapid. Just three minutes later, Carvajal and Lucas Vázquez linked up down the right and the Galician ace's cross was headed home by Benzema in one of their first forays forward.

Varane puts the Whites ahead
At 1-1, the Whites slowed the game down and took control of the ball, while Villarreal bided their time and waited for the counter-attack. On 15’, a lively Benzema sent Lucas through with a fine assist but Asenjo stood up strong for the hosts. Real Madrid were on top now and it was Varane who found the reward their superiority merited. The Frenchman made it 1-2 when he rose to head home a Kroos free-kick from the right (20’). The score could have been more convincing at the break, but Modric's effort was ruled out for offside on 33 minutes.

Bale, who had pulled up towards the end of the first half due to a knock, was replaced by Isco at half time. Real Madrid kept up their attacking play, but the game was still very much wide open. On 50’, Benzema took a roll of the dice from outside of the area, but his effort was well saved. As the clock ticked down, the hosts began to press forward and put Real Madrid under pressure.

Chances
Villarreal were looking more and more likely to get the leveller and Real Madrid wanted to kill off the tie. Gerard fired in a shot that ricocheted of the post (64’). Lucas Vázquez showed his class for the Whites but was kept at bay by some Asenjo heroics. The game was now anybody’s. Álvaro struggled to convert a corner for the hosts (71’). Villarreal went on the offensive again and Cazorla scored a blazing header on 82’ to level the clash. The teams would battle away down to the very last, but the spoils at the final whistle, were shared. 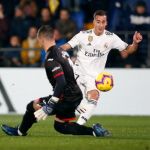