The Brazilian's wonder-strike and a goal for the Croatian seal all three points against Sevilla at the Bernabéu.
Santiago Bernabéu

0
Real Madrid began the second round of LaLiga games by beating one of the best-performing teams so far, Sevilla, putting on a dominant display from start to finish in front of their own fans. Despite the score-line, the result could have been more emphatic based on each side's merits at the Bernabéu, but the first goal on the night was one for the photo album. Casemiro's wonderful long-range effort which made it 1-0 was worth the ticket price alone.

Real Madrid looked solid from the off, confident in possession and exerting impressive pressure on the opposition to win the ball back quickly. The first clear chance came after just six minutes when Modric won the ball in midfield and Benzema played Vinicius Jr. through against Vaclík, but the visiting keeper came out on top.

Further chances
The minutes ticked by and the hosts continued to dominate, but half-way through the first period, the visitors had a good chance to go ahead when a counter-attack saw Escudero through on goal but he just couldn't beat Courtois. The first 45 minutes finished goalless despite another couple of fine opportunities for the Whites before the break, as shots by Benzema, on 36’, and Vinicius Jr., on the stroke of half-time, ended up in Vacklík's gloves.


The second half was all madridista. The hosts had all the ball and all the chances. Casemiro, on 54’, and Modric, three minutes later, both shot from the edge of the box but failed to score. The Croatian star tried again on 58’ when he rifled a shot from the penalty spot, but a Sevilla defender got in his way and the ball ricocheted off the wrong side of the post.

The Whites’ best minutes
Real Madrid were playing their best football and enjoyed another fine chance. Vinicius Jr. made a great solo play but his shot flew centimetres wide of the post. It was a matter of time before the Whites’ goal arrived. On 67’, Ceballos sent a wicked long shot crashing onto the bar. The difference between the sides was clear and the goal was the only thing lacking. It nearly came again on 74’ when a rehearsed corner ended up at Reguilón’s feet on the edge of the box, he squared to Casemiro, who headed onto the post.

Sevilla were under the cosh now and just a few minutes later the Whites had their goal. Casemiro was the star as he fired off a shot from 30 metres out to open the scoring. Vaclík got a hand to the ball but he could not stop the effort from the Brazilian. In the dying moments, Modric showed his class, after taking the ball from Carriço and sending in a shot that flew past Vacklík and sent the Bernabéu into a frenzy. 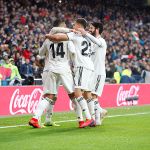