The Whites lost to Leganés at Butarque but the 3-0 home win saw them through, and they find out their next rivals this Friday.
Butarque

0
Real Madrid will be in the Copa del Rey quarter-final draw. The Whites lost to Leganés 1-0 but they got through on aggregate thanks to their performance at the Santiago Bernabéu (3-0). Braithwaite scored the only goal of the game at Butarque and Brahim hit the post in what was the madridistas’ clearest chance. The Whites will find on Friday who they will face in the next round, the first leg of which is to be played just two short weeks from now.

On a cold night in Leganés, the game was slow to pick up any pace. The hosts tried their luck, arching in crosses from the wings along with a few long-range shots. Gumbau and Sabin Merino both produced thumping headers around the 20-minute mark. Real Madrid had a chance to go ahead on 29’. A steely counter-attack set up Isco to take a shot, but Juanfran thwarted his effort, before Valverde tried to turn the rebound in, only for it to be blocked by Cuéllar. The next move saw Braithwaite smash a headed effort onto the post and then after a melee of rebounds he was able to make it 1-0 to give Leganés renewed hope. Just before the break, Bustinza and Vinicius Jr. both made attacking runs, neither to any avail.

Chances for Vinicius
After the restart, Solari introduced Ceballos in place of Reguilón, a change which afforded Vinicius Jr. more room in which to manoeuvre down the left flank. The first chances of note in the second period fell to the Brazilian. Madrid were dominating possession and enjoying lengthy spells in the opposition's half as the hosts battled against the clock. There was now half an hour remaining and the two teams were taking turns to pose a threat on the opposition's box, with neither managing to fashion any clear-cut chances.

Brahim hits the woodwork
Cristo entered the fray at Isco's expense, whilst Vinicius Jr. continued to carry the biggest threat, although his efforts on goal were failing to find their target. Leganés poured forward in the closing stages in search of a second goal. A headed effort from Martin Braithwaite and Sabin Merino's strike came close, but both failed to trouble Navas. In the 90th minute, Brahim, who was Madrid's third and final substitution, struck the upright after being well picked out by Vinicius Jr.  The home side ended the game by carving out a string of further chances, all of which Navas managed to keep out. Real Madrid progress to the quarter-finals and now await to discover their opponents in the next round. 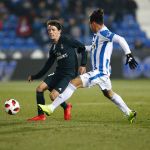