Real Madrid deserved more from a match which will be remembered for the penalty that was not awarded after a foul on Vinicius Jr. when trailing 1-0.
Santiago Bernabéu

2
Real Madrid were unable to pick up any points against Real Sociedad in a match marred with controversy, most notably when the referee didn’t award a penalty after Rulli brought down Vinicius Jr. inside the box with the score at 1-0 to the visitors. The match got off to the worst possible start as with just 2 minutes gone, the referee awarded a penalty for a Casemiro foul on Merino. Willian José stepped up and put the visitors ahead. From there on it was all Real Madrid, who had clear chances to draw level before the break. The first effort came from Benzema, but his shot from inside the six-yard box went just wide of the target after 10 minutes.

The Whites had another clear opportunity five minutes later. A great pass from Benzema picked out Vinicius Jr. but the Brazilian forward was unable to beat Rulli in the one-on-one. The home side dominated possession and Modric forced a save from the visiting goalkeeper on 22' with a good strike from the edge of the area. Lucas Vázquez also came close to levelling things up before the break, but his cross- come-shot struck the post.

There was no change to the script after the break. Real Sociedad sought to defend their lead, whilst Real Madrid kept searching for a deserved reward and they nearly got it in the 48th minute. Kroos's corner was met by Varane and after his initial effort was blocked, Vinicius Jr. conjured up a bicycle kick that Rulli palmed away, before Varane had a second bite at the cherry, with his second effort put behind for a corner by Willian José.

Lucas Vázquez sees red
Vinicius Jr. was once again in the thick of the action just three minutes later. The Brazilian exchanged passes with Benzema, before unleashing a chipped effort which shaved the upright. Solari shuffled his pack in the 58th minute as he sent Isco on for Casemiro. However, things got even worse for Madrid in the 62nd minute, when Lucas Vázquez was shown a second yellow. Madrid would now have to stage a comeback with 10 men and the world champions could have had the chance to restore parity two minutes later, but the referee failed to point to the spot when Vinicius Jr. was clearly upended by Rulli. The Brazilian forward had another opportunity minutes later when he was picked out by Carvajal's cross, but his volleyed effort was well kept out by the La Real custodian and Zurutuza cleared off the line to prevent Ramos from scoring on the rebound.  On 79', Vinicius Jr. again tried his luck, only to see his curling effort fly narrowly wide. With 83 minutes on the clock, Pardo headed home to put the result beyond Madrid's reach. 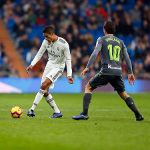