The Bernabéu enjoyed a convincing win over Melilla with goals for Asensio (2), Isco (2), Javi Sánchez and Vinicius Jr.
Santiago Bernabéu

1
The Santiago Bernabéu enjoyed a perfect evening of great football and goals galore as Real Madrid booked a place in the Copa del Rey last-sixteen by thrashing Melilla (6-1). Asensio (2), Isco (2), Javi Sánchez and Vinicius Jr. got the goals for the madridistas as Fran García and Fidalgo both took the chance to make their first-team debuts. Solari's men, who were able to rotate the squad somewhat, will now wait to discover their opposition in the next round in the draw on 13 December.

Both sides signed up for open, attacking football from the get-go and the result was an attractive clash with chances flowing at both ends. Melilla came out the blocks looking to make an impression and it was Yacine and Mizzian who claimed the first real chances of the game. It didn't take long for the madridista attack to respond though, and Isco forced Pedro Luís into his first save with 13 on the clock. The Melilla shot-stopper rescued his team again a short time later with a wonderful stop against Vinicius Jr. The link-up between the Brazilian ace and Isco was looking increasingly threatening for the visitors and with 32 minutes gone, the Malaga-born ace played Vinicius in only for him to fire over.

Asensio hits a brace
Real Madrid were now in control of the game and it looked a matter of time before the goals arrived. On 33’, Asensio slipped through the Melilla defence, took the ball under control and sent it into the corner of the net. Two minutes later and Vinicius got away from his man with a fine piece of skill on the left wing and pulled it back for Asensio to complete his double. The Whites were proving an absolute whirlwind up top and inside 39 minutes, Javi Sánchez got his first Madrid goal when he got on the end of an Asensio cross. The game was 3-0 at the break despite Vinicius and Isco both having chances to extend their advantage.

The game and tie were all but over, but there were 45 minutes left for the fans to enjoy. Fran García and Ceballos came on for Carvajal and Llorente after the break. The fourth goal came on minute 48 as Isco scored a long-range shot, right into the top corner. Despite the goal difference, Solari's team continued in their search for goals. Vinicius Jr found the net yet again.

More goals
The Brazilian was ready for more, and got a goal on 75’, after sending home his original shot that had been kept out. Melilla were still on the hunt for a goal of their own and Brian Martín forced Keylor Navas to show his goalkeeping class, making a splendid save. On 79’, Solari used his remaining substitutions, sending on Fidalgo. Yacine then fired home a penalty for the visitors on 81’ and Isco saw to it that the hosts would not disappoint the fans. On 83’, he made it 6-1 thanks to some beautiful play from Fran García. Real Madrid continue their run of wins and are now into the last-sixteen of the Copa. 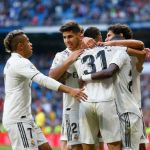