An own goal from Wass, and a Lucas Vázquez strike see Real Madrid win at the Bernabéu.
Santiago Bernabéu

0
Real Madrid beat Valencia as they returned to action at the Santiago Bernabéu. The team were rampant from the start, and on three minutes, they threatened to score the opener. Bale crossed in for Benzema, whose left-footed volley was wild, ballooning out of play. This was merely a taste of the attacking prowess to come, as five minutes later, the opener came. Carvajal, battled with Gabriel Paulista to gain possession and at a tight angle, he cut past Gayá to cross in. Wass made an attempt to clear the danger, but tipped the ball into his own net.

Solari's team had now done the hardest part: score against the tightest defence in LaLiga. They wouldn't settle for just one though. The Whites needed more. With half an hour gone, they came close. Bale controlled the ball in the box with his left and his shot forced Neto to show his quality. The hosts had another two chances before the break. Both opportunities came from outside the box. Benzema had an attempt on 36’ and then Bale again tested Valencia. Both efforts were dangerously close. An excellent first half from Real Madrid, who had outclassed their rivals.


The script changed after the interval as Valencia began to muster some chances. In the 51st minute, Carlos Soler sent in a cross that zipped across the area and forced Courtois to produce a smart diving save. Two minutes later, Santi Mina had an even more clear-cut opening after Parejo conjured up a sublime pass from inside his own half that the forward brought under his spell, before ultimately being unable to outfox the Madrid goalkeeper in the one-on-one.

Chances
On 65', Parejo's free-kick was flicked on by Coquelin and reached Gabriel Paulista at the far post, but he contrived to sent his effort over the bar. Solari turned to his bench and introduced Marco Asensio in place of Gareth Bale, before bringing Valverde on for Modric. The Balearic-born attacker had a chance to score the second of the night after an inspired piece of play from Marcos Llorente, but his effort from inside the area was blocked by the diving Piccini.

The minutes continued to tick by, when, in the 83rd minute, Lucas Vázquez put the result beyond all doubt as he swept home a left-footed strike following another Benzema assist. Just as they had done days earlier in Rome, the Frenchman and the youth-team product linked to devastating effect. This was the second game in which the side have kept a clean sheet and the fifth shutout in the seven encounters that Solari has overseen since taking over the reins. 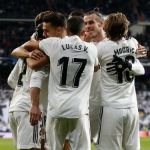