3
Real Madrid are now into the final of the Club World Cup. Bale fired in a scintillating hat-trick in the space of 11 minutes, and the Whites were better than the Asian champions Kashima Antlers. Now, on Saturday they must fight to become the best team on the planet for the third year in a row. The hosts Al Ain beat River Plate on penalties and will therefore be the team who face Real Madrid as the Whites hope to make history.

The game began with some dangerous moments for the European champions and Courtois was forced to hold off the crossed shot sent in by Serginho on 2 '. With the corner that followed, the ball went into the box but nobody could finish. Real Madrid then became dominant. They took the ball from one wing over to the other in search of some weakness in their rivals' defence. The pressure they piled on was soon to pay off. The first real chance for the whites came in the 11th minute Benzema rifled a shot in, but Sun Tae was superior to the shot.

Chances
The Japanese side looked to respond, but Courtois overpowered Doi in a tough one-on-one. The home side did not challenge the Belgian goalkeeper again in the first half. Real Madrid saw more and more chances to open the scoring. Kroos sent in a shot from outside the box on 30 'and then two minutes later Ramos tried a header after the German lofted in a free-kick. The first shot was saved by Sun Tae and the header after went mere centimetres wide of the goal.

The minutes were ticking by when, just before the break, Bale stepped up to open the scoring. The Welshman picked a sublime one-two with Marcelo and his shot across goal on 44’ put the Whites one up and was just reward for his constant threat down the left-hand side.

Bale makes it three
The second half began as the first had ended, with Real Madrid on the front foot. Bale again got in behind Uchida and his cross found Benzema in the box. His shot beat the keeper but was cleared off the line by Yamamoto. The Whites made no mistake with their next chance, though. Bale, as quick as he was smart, pounced on a lack of communication between Jung and his goalkeeper four minutes later to turn home easily with his right foot. Then, with 55 minutes gone, the game was as good as over. The Welshman was the key figure once more, bringing Marcelo’s second assist of the game under control and unleashing an unstoppable left-footed drive into the back of the net. It was Bale’s sixth goal at the Club World Cup.

Shortly after he was replaced by Asensio on 60 minutes to a rousing ovation from the Zayed Sports City Stadium. The Spanish ace lasted just 14 minutes before coming off with discomfort, Casimero on in his place to make his comeback from injury. Then, with 78 minutes on the clock, Doi cut the deficit following consultation with VAR, but Real Madrid were comfortable to the end and will now take on Al Ain to be crowned world champions. 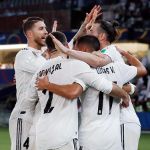